Unchained by a Forbidden Love (Eternal Mates Book 15) is out now + awesome giveaway!

UNCHAINED BY A FORBIDDEN LOVE, book 15 in the series, is out now. It’s time to catch up with what has been happening in this world of dark elves, shifters, fae, demons and angels…

Over the coming two weeks, I’ll be sharing the first four chapters of this book. Read on for chapter one, and details of the awesome giveaway you can enter! 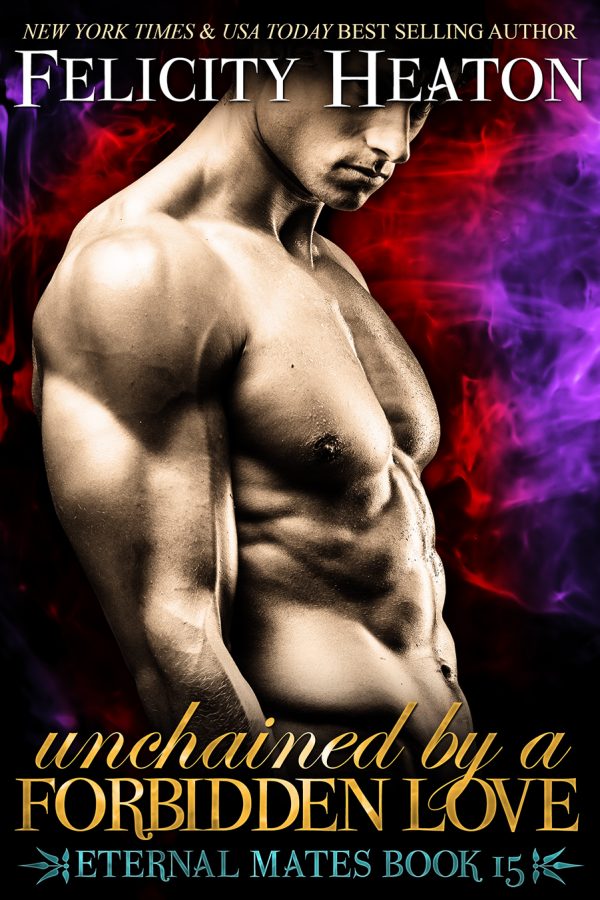 Lost to the darkness, Fuery wages a daily war against the corruption that lives within him, constantly in danger of slipping into the black abyss and becoming the monster all elves fear. Work as an assassin gives him purpose, but what reason is there to go on when he killed the light of his life—his fated mate?

Shaia has spent forty-two centuries mourning her mate. Tired and worn down, she agrees to wed a male of her family’s choosing, following tradition that has always bound her as a female and hoping she will be able to gain just a little freedom in return. But as she resigns herself to being the mate of a male she could never love, fate places an old friend in her path—one who tells her that her lost love is alive.

Will Shaia find the courage to break with tradition and leave the elf kingdom in search of her mate? And as a ray of light pierces his soul again, can Fuery find the strength to win his battle against the darkness or will it devour him and that light of their forbidden love forever?

It was never a good day when he woke with the taste of blood on his tongue and no recollection of how it had got there.

Fuery stared up into the darkness, cold sweat trickling over his exposed chest and sticking the thin black bedclothes to his legs. He breathed hard, each heavy desperate exhalation shattering the silence, rasping in his ears together with his thundering heartbeat.

Icy claws gripped him, sinking into the blackened remains of his heart, attempting to pierce deep enough to reach whatever fragment of light remained in him.

He squeezed his eyes shut, dragged down a shuddering breath and held it, unwilling to let fear pull him into the darkness. He would not let it win. He couldn’t. He exhaled slowly, a measured pace that created a sliver of calm, enough to give him the strength to shake the grip of his fear and allow him to extinguish that emotion.

Because fear was a weakness.

He did not feel such things.

He hadn’t in a long time.

Not since he had hardened himself to the world.

Not since that night.

Fuery screwed his eyes shut even tighter, his lips drawing into a grimace that flashed his emerging fangs as the darkness welled again, pulling up memories from the abyss. They surged and fought for freedom, and he growled as he pushed back against them, battled and resisted them. The fight took longer this time, strained minutes in which the fear slithered back in and wrapped around him again, squeezing his lungs tight and hissing whispered taunts in his ear, words about the terrible sins he had committed that had the memories surging harder, almost breaking to the surface.

He gripped the sides of his head and squeezed hard as he snarled through his clenched fangs. Tears cut down his temples, hot against his chilled skin. He didn’t want to remember, but he could never forget either.

He didn’t want to go back into the darkness, refused to sink into oblivion again and do the vile bidding of the darkness that lived inside him. Not again.

He grappled with fear, wrestled with the darkness, and fought the tide of memories, and somehow, the gods only knew how, he managed to subdue them and vanquish the raw agony and the sheer terror that threatened to push him back over the edge.

He panted hard, body trembling from the exertion of overcoming the darkness and clawing his way back to the light.

Couldn’t think about that night.

The past was pain.

A constant source of it that scoured his blackened soul.

He inhaled and exhaled, keeping them measured and deep, struggling for calm again as his past and his present churned inside him, rocking him and trying to keep him off balance, on the brink of teetering back into the abyss.

Fuery chanted it in his mind as he sought the calm—the quiet.

It was slow to come while the darkness roared inside him, drawn out by the fear that had paralyzed him, weakened him and opened him to it. Its inky tendrils snaked around his heart and squeezed it in his hollow chest.

Attempted to claim his soul.

Calm seemed an impossible dream while blood coated his tongue.

But gods, he wanted it, reached for it, desperate to shirk the grip of the fear and the darkness again.

They combined to overpower him and he could feel himself slipping again, skidding down that terrifying slope towards the cold forbidding darkness where it reached for him, beckoned him with promises of oblivion and an escape from the madness.

The past was a nightmare.

The past was pain.

He opened his eyes and stared up into the darkness as he forced himself to see where he was in a vain attempt to focus on the present. He was here, in the guild, in the free realm of Hell. He was far away from there. Leagues from the elf kingdom. Centuries away from his past.

Light streaked across the darkness and his eyes swiftly adjusted to the onslaught. A shadow made the slim vertical shaft flicker and then brightness exploded in the room, driving back the darkness entirely.

Just as the male on the threshold of his room drove it from his soul.

Hartt looked at him through sleep-filled eyes and murmured huskily in the elf tongue, “I felt you stir. Everything alright?”

Fuery went to nod, because any other response would leave him weak. Vulnerable. He stopped himself, paused and stared at Hartt where he stood dressed in only a loose pair of black cotton trousers and scrubbing a hand over his short sleep-mussed black-blue hair, yawning the whole time.

He didn’t need to protect himself like that with this male.

Hartt knew the truth of him. Knew his secrets. His story.

Hartt yawned again, smacked his lips together and rubbed sleep from his violet eyes as he stepped into the room. He quietly closed the door, descending the room back into darkness that lasted only a second. A soft glow burned in the glass lamp on the low round wooden table near the window to Fuery’s left and gradually gained strength, driving back the shadows again and drawing some of the darkness out of the black plastered walls, softening the bleak colour.

Unreliable since that night.

The male padded silently barefoot across the stone floor towards him and sat on the edge of the bed on his left, causing Fuery to roll towards him. The warm light chased over Hartt, throwing the left half of his face into shadow.

Hartt’s violet eyes softened as they met his. “Tell me about it.”

Fuery sank back into the double mattress on a sigh and averted his gaze, pinning it back on the wooden ceiling. Gods, he didn’t want to speak about it. Everything in him screamed to protect himself by making the male go away, but that light Hartt always seemed to draw out of him emulated the lamp, fought to grow brighter and drive the darkness back.

He had to speak about it. Years of experience had taught him that. Holding it inside would only give the darkness a firmer hold on him, making it harder to shake it and increasing the risk of him sinking into that terrible oblivion again.

He didn’t want to go there.

So he forced himself to speak.

“I woke…” His hands tensed against his bare stomach, fingers curling into fists, and he pushed onwards. “I woke with the taste of blood in my mouth.”

He could still taste it now.

He dropped his gaze to his body. No trace of crimson on his torso. He uncurled his hands and lifted them, stared at his fingers and his callused palms, scouring them for a sign, some evidence that he had lost himself to the darkness and had killed.

There wasn’t a single fleck of blood on him.

But it was there in his mouth.

“I think I did something terrible,” he whispered and shook his head, numbness sweeping through him and bringing fear in its wake, a stronger wave this time, one that threatened to pull him under. Break him. “I don’t remember. I can’t recall how I got to my bed.”

He shifted his gaze to land on Hartt.

The pity shining in Hartt’s violet eyes drove shame through his heart like a spear and he quickly looked away.

“I put you here,” Hartt said softly, his deep voice a bare whisper but one that soothed Fuery, easing his fear and the grip the darkness had on him. “You had an… episode… and I brought you home.”

Relief bloomed inside him, sweet and warm, but the darkness still refused to release him and worry continued to slither inside him like a living thing, hissing in his ear that Hartt was lying, that he had killed and the male was covering it up.

Hartt seemed to see it, because he sighed and jerked his chin towards him. “Open your mouth.”

Fuery didn’t hesitate to do as he was ordered. The male leaned over, peered into his mouth and lifted his top lip with his left hand. When he prodded Fuery’s tongue on the left side, sharp pain lanced the length of it and he flinched, almost biting Hartt’s finger. The male was too fast for him though, reacted in a heartbeat and had his finger clear before Fuery’s fangs could pierce his flesh.

“You must have bitten your tongue when you were thrashing around. That’s all.” Hartt eased back.

Gods, the relief that hit Fuery this time was like ambrosia. It poured through him, washing away his worry and easing the chill from his blood.

Hartt’s lips tugged into a smile and he slowly shook his head. “For a male who makes a living taking lives, you are oddly affected by the idea of killing.”

Fuery knew it was a paradox, that Hartt was right and he had no qualms about his life as an assassin.

But there was a vast difference between killing when he was in control and murder when he was lost to the darkness.

He had felt that way for many centuries.

He had felt it since that night.

Now he couldn’t bear the idea he might kill someone innocent during one of his blackouts.

He looked to Hartt and saw in his eyes that he wouldn’t tell him if he did. Hartt was noble in his desire to protect him from the pain of the things he did when the darkness was in control, but Fuery didn’t want his friend to lie to him, to cover the truth and spare him like that.

He needed to know the things that he did. He had to know them. He could never atone, but he could bear his sins.

Because all that he had done, and all that he might do, paled in comparison to the sin he had committed.