It’s time for the cover reveal of the next Eternal Mates series book, Haunted by the King of Death. I’m sure everyone has been curious about the savage, merciless vampire Lord Van der Garde since he prowled onto the scene in the second book in the series, Claimed by a Demon King, and now it’s time to find out why this dangerous and deadly alpha male is just so damned distant and untrusting of females.

If you haven’t had a chance to step into this passionate and action-packed world of dark elves, fae, demons, vampires, shifters and hunters, then you can take the leap with the first book in the series, Kissed by a Dark Prince, which is only 99c / 99p right now. Find the links to your favourite retailers at: http://www.felicityheaton.com/kissed-by-a-dark-prince-paranormal-romance-novel.php 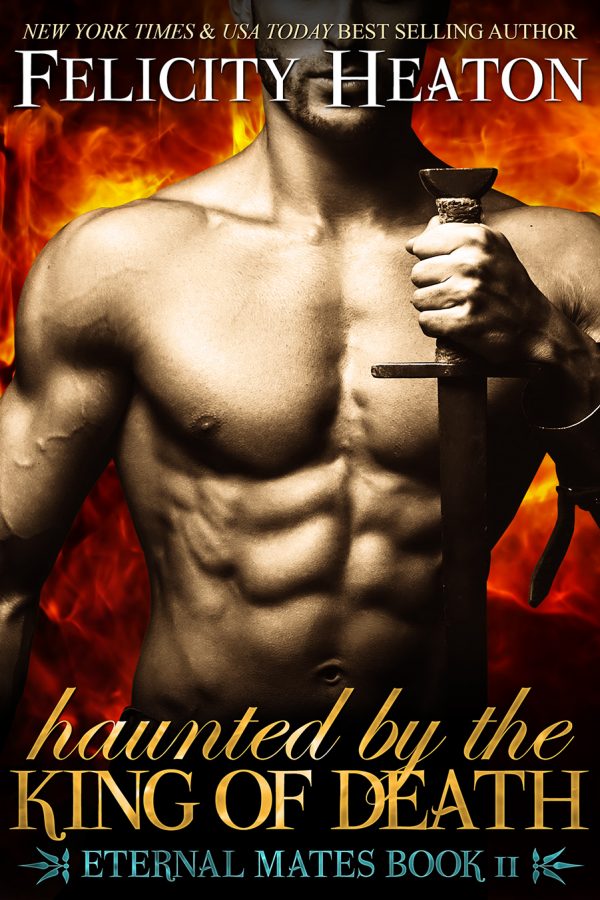 Here’s more about the next book in the series, due for release on July 30th!

Haunted by the King of Death (Eternal Mates Romance Series Book 11)
Felicity Heaton
A ruthless vampire warrior, Grave Van der Garde rules the mercenary Preux Chevaliers with an iron fist, determined to retain his hard-won position as one of the most powerful men in Hell and his reputation as the heartless King of Death. But beneath the cold façade beats the heart of a vampire torn between love and hate, ripped in two directions by a single ethereally beautiful female—his fated phantom mate.

Driven by her phantom instincts, Isla used a spell to make her solid in order to deceive the vampire who killed her sister’s demon mate and have revenge on him, condemning him with a single kiss to become a phantom too. But her plan took an unexpected turn when she fell in love with him, and with her new life, and the night she betrayed him shattered both of their hearts. Now, he lives to make her suffer through their connection, one that is fading with them as they begin to slip into the phantom world, and she must face the monster she created if she is to save herself and the vampire she still loves.

With a demon from Grave’s past determined to destroy him and everything he holds dear, and the clock ticking down to their inevitable doom, can he and Isla overcome their past and their pride to work together to claim the future they both desire deep in their hearts? Or will death finally catch up with the vampire king and his phantom mate?

Haunted by the King of Death is due for release in ebook and paperback on July 30th 2016 and will be available from all major online book retailers on that day, including Barnes and Noble Nook.

Join my mailing list to receive a notification when Haunted by the King of Death is released, PLUS a sneak preview of the first 5 chapters of the book and chances to win a signed paperback copy: http://www.felicityheaton.com/newsletter.php

Add the book to your Goodreads shelf at:  https://www.goodreads.com/book/show/28524677-haunted-by-the-king-of-death

Books in the Eternal Mates paranormal romance series:
Book 1: Kissed by a Dark Prince
Book 2: Claimed by a Demon King
Book 3: Tempted by a Rogue Prince
Book 4: Hunted by a Jaguar
Book 5: Craved by an Alpha
Book 6: Bitten by a Hellcat
Book 7: Taken by a Dragon
Book 8: Marked by an Assassin
Book 9: Possessed by a Dark Warrior
Book 10: Awakened by a Demoness
Book 11: Haunted by the King of Death