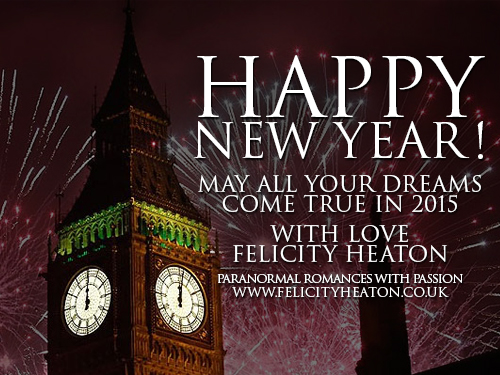 Happy New Year! My post is a little late but I was caught up in the craziness of releasing Hunted by a Jaguar (Eternal Mates paranormal romance series book 4) on January 6th and things haven’t really settled down yet as my next release, Craved by an Alpha (Eternal Mates paranormal romance series book 5) hits virtual shelves on January 27th. It’s all go in 2015!

I wanted to make a post looking back at how wonderful 2014 has been for me, thanks to you guys, and what’s in store for me in 2015.

2014 rocked! Together with a fantastic group of authors, I became a New York Times bestseller and hit the USA Today bestsellers list again. The Eternal Mates series really took off, much to my joy as I love writing in this world, and now I can happily write books for it to my heart’s content. I met plenty of wonderful new readers on my social networks, received some amazing reviews for my books, and I think I strengthened existing bonds with my readers. I also managed to smash my word count target for the year, hammering away 569,000 words to beat the 400,000 words goal. I even hit my reading target of devouring 20 books during my down time!

I’m hoping that 2015 will rock just as hard! I have exciting plans with the same group of authors I’ve been working with the past couple of years, lots of book releases on the cards if the gods are kind and let my schedule run as planned, intend to read another 20 books, and I have another 400,000 word count to achieve. How am I going to achieve that word count?

Well, regulars to my blog or Facebook will know I’m currently working on wrapping up book 7 in my Eternal Mates series, which will release in March. Once this book is done, I’ll be working on a novella for the Vampire Erotic Theatre series, one for the Eternal Mates series, and one for the Her Angel series. After those are done, I’ll be editing the first book in my Guardians of Hades series and writing the next two novels. I’m also hopeful that I can get a novella written for the Vampires Realm series and ready for release towards the end of the year. As I said above, this is all dependent on the gods being kind and my muse being as productive as ever.

Here’s what my release schedule will hopefully look like when we’re looking back on it in January 2016 in my New Year’s post then:

I may or may not manage the final one. It all depends on time really. It might end up pushed for another book entirely or just moved into early 2016. Or a bit of both.

So, leave a comment and be sure to let me know whether you’re excited about my release line up this year!