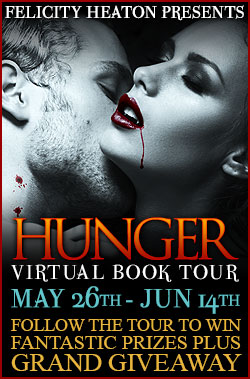 Itâ€™s great to be here today at my blog as part of the Hunger Virtual Book Tour celebrating the release of the latest book in my Vampires Realm series of paranormal romance novels. I canâ€™t believe this is the last post in this tour. Iâ€™ve had a blast!

Today, Iâ€™m going to be talking about whatâ€™s to come in the Vampires Realm series.

But before we get to the main event, I want to introduce myself. Iâ€™m a British paranormal romance author and a New York Times and USA Today best-seller. I have been writing since 2005, and went indie in 2006. I love to write big worlds, populated by vampires, shifters, demons, fae and angels, and I have several series. This tour is about the Vampires Realm series, which focuses on the world of the seven pureblood vampire families of Europe, the werewolves fighting for their freedom, the weakling vampires, and the vampire hunters determined to destroy them all.

Now, on with the showâ€¦

The next Vampires Realm release will actually be a novella, if everything goes to plan. It will feature Tynan as the hero and will be part of an anthology Iâ€™m putting together for release in 2015. Because itâ€™s a novella, I canâ€™t say much about it other than heâ€™s finally going to get a woman.

Speaking of finally getting a womanâ€¦ so I know everyone has been waiting for a while to get their hands on Hyperionâ€™s book. Wait. You havenâ€™t? Oh wellâ€¦ never mind. Forget about his book then.

Just kidding. I wouldnâ€™t do that to you guys!

Iâ€™ve had so many of you ask me when youâ€™re going to get Hyperionâ€™s book, and Iâ€™m pleased to announce that the next novel in the Vampires Realm series will be his romance.

In the Vampires Realm timeline, his romance is already in progress, although I guess you could say that his romance has been in progress for a long time now.

Hyperionâ€™s story will begin around the same period as Winterâ€™s Kiss, with the first half of the story set then. It will span the time of Masquerade, and cross-over slightly with that book and events that occurred in it. And it will end after Masquerade, when Hyperion will finally get his forever after.

Which rather neatly brings me to the title of his book â€“ Forever After â€“ which will be book 9 in the series.

I canâ€™t say much more about his story without giving spoilers. Iâ€™m not a big fan of spoilers so I will keep this one as secret as possible until I begin writing it. At the moment, the plan is to release Forever After in 2016.

Want some clues about Hyperionâ€™s romance? Head over to my website and read the flash fiction with him: The Moon and the Cherry Tree

Be sure to follow this fantastic tour to learn more about the passionate heroes and strong heroines in the Vampires Realm romance series! You can also find yourself in with a chance to WIN a $50 or $25 Amazon Gift Certificate if you follow the tour. More details, including how to enter and a full list of stops, are available at the Hunger Virtual Book Tour page: http://www.felicityheaton.com/hunger-book-tour.php

Hunger can be read out of order with the rest of the series and is available from Amazon Kindle, Kobo Books, Barnes and Noble Nook, Apple iBooks stores and other retailers. Also available in paperback. Find the links to your preferred retailer and a downloadable 6 chapter excerpt at:Â  http://www.felicityheaton.com/hunger-vampire-romance-novel.php

Hunger (Vampires Realm Romance Series Book 8)
Felicity Heaton
Betrayed by one of her own and turned into a vampire, hunter Eve is consumed by her hunger for vengeance and has spent five years surviving hell, driven to take the life of the man she once loved. But just as she is about to close in on the hunter-turned-vampire, an event is set in motion that threatens to see him slip beyond her grasp foreverâ€”the leader of her bloodline has sent an escort to bring her to the familyâ€™s mansion. To a nest of the very creatures she once hunted and loathes.

Hunger can be read out of order with the rest of the series and is available from Amazon Kindle, Kobo Books, Barnes and Noble Nook, Apple iBooks stores and other retailers. Also available in paperback. Find the links to your preferred retailer at: http://www.felicityheaton.com/hunger-vampire-romance-novel.php

oooh! Thanks for the clues and curse you! for the teasers! LOL I love love love vampires and am very glad that I “discovered” you! I have most of your books, but can’t wait to get the rest and all others still to come! I sincerely hope that you wil be writing a LOT more of them 🙂

thank you for the chance at such a great contest. love the cover, it’s gorgeous and the book sounds wonderful. i look forward to reading it.

Oh wow! CAN NOT wait for Hyperion’s story, it’s going to be so exciting and one he’ll of a read, I just know it! I expect you going to make a lot of us Women very happy with that announcement! Oh and tyrnan’s gonna get a Woman Yay! Looking forward to reading this one too!

God Felicity, you are definitely Rocking with all these Treats your giving us!
Thank you!

This is the next sereis I’m starting 🙂

Prophecy: Child of Light is this weekends read.