My guest author this week is the wonderful Lynda Hilburn! Sheâ€™s here to talk about her latest release, Crimson Psyche, share and excerpt and to give away a copy. Iâ€™ll hand things over to her nowâ€¦

I want to thank Felicity for having me back on her blog! Iâ€™m happy to be here to celebrate the release of the third book in my Kismet Knight, Vampire Psychologist series â€“ Crimson Psyche â€“ which is now available in the UK, in both ebook and print form!

Itâ€™s so much fun writing about counseling vampires and exploring the undead versions of various psychological diagnoses. A vampire with a fear of blood, suicidal urges or agoraphobia puts a very different spin on those familiar challenges. And a bloodsucker with a sex addiction? Constantly searching for partners can be exhausting. Even for immortals!

Iâ€™d like to introduce you to the world of Kismet and Devereux, the 800-year-old master vampire who has turned her world upside down.

In case youâ€™re new to my series, hereâ€™s the reading order:
Devereux: The Night Before Kismet [short story]
The Vampire Shrink
Until Death Do Us Part [short story]
Sex in a Coffin [short story]
Blood Therapy
Crimson Psyche 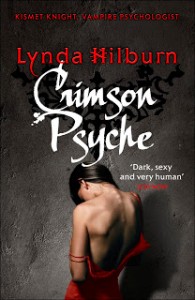 When Kismet Knight became the Vampire Psychologist, she didnâ€™t bank on discovering that vampires are, in fact, real â€“ let alone falling for an 800-year-old master vampire. But thatâ€™s now the least of her worries. A hunter is out there, and he has plans for Kismet. When a strange, cold darkness brushes the back of her thoughts, it awakens Lust, a dangerous part of her psyche she cannot control. Kismet had better hope that she and her friends will find the answers, because this is enough to make anyone lose her mindâ€¦

The unexpected change in schedule left me feeling disconnected. I hated to admit it, but Iâ€™d come to rely on Devereuxâ€™s companionship, and when he was off being Master of the Vampires or International Mega-corporate Genius, I missed him.

â€œYouâ€™re pitiful, Kismet. Time to get a life,â€ I said aloud.

An enticing aroma caressed my nostrils, I heard a familiar pop sound behind me and a velvet voice inches from my ear whispered, â€œWhat kind of life would you like? The possibilities are limitless.â€ Soft lips trailed kisses down my neck and my brain cells scrambled.

I began the mental hum, which had become automatic in the presence of vampires. So far, it kept me from getting killer headaches or turning into a lobotomized zombie around powerful bloodsuckers. My breath caught and it took me a couple of tries before I found my voice.

â€œYouâ€™re back. Thereâ€™s something I wanted to ask you. If I could only remember what it was . . .â€

Or why Iâ€™d want to use my mouth for talking when it could be put to much better uses.

â€œLater.â€ He kissed my jaw and I was undone.

As always when Devereux was near, my body rolled out the hormonal red carpet. I relaxed against his chest and savored his arousing fragrance, and the softness of his hair tickling the side of my face. My heart rate increased and my breath went shallow. Formerly functional knees softened. I was never sure if my reaction to his presence was excitement or fear, or a little of both. I used to wonder if my body responded to him only because of his powers as a master vampire, or if I was simply that attracted to him. After having his mind-muddling effect muted by the elders, it was a relief to know that my feelings â€“ and lust â€“ for him were purely natural.

He couldnâ€™t read my thoughts any more unless I was in the throes of some intense emotion â€“ and I tried to keep myself calm to avoid that â€“ but heâ€™d become very good at interpreting my visible cues.

I closed my eyes and enjoyed the moment. Even though I was no longer unduly influenced by his presence, I still thought there had to be something wrong with how powerfully he affected me. It couldnâ€™t possibly be psychologically healthy for me to think about leaping on him within seconds of his approach or to want to cling to him like a cheap Spandex suit. Iâ€™d gotten better at reining in my impulses, but it was still a struggle.

Nobody should have a face that gorgeous. Or eyes so magnetic. Or a body so enticing. It just wasnâ€™t . . . normal.

Right, Kismet. Heâ€™s a vampire â€“ as if anything about him could ever be normal.

He slid his hands up and down my arms, then stroked my hips through the soft, form-fitting fabric of my dress and moaned softly. His tongue flicked along my neck and I lifted my chin to give him better access to his favorite pulsing vein â€“ allowing Devereux to drink my blood while we have sex pushes my orgasm into the stratosphere. I shivered, acting like a shameless addict, jonesing for the sharp needle-points of his teeth to pierce my skin and provide the fix I craved.

Instead of biting, he just nibbled gently, then let go.

I groaned in disappointment.

He whispered against my ear, â€œI love how you desire me. I can feel your need.â€

Shouldnâ€™t I be annoyed by his ego, his arrogant assumption that I want him? The fact that itâ€™s true is beside the point, isnâ€™t it? I think Iâ€™m going to need to sit down soon. Or maybe lie down. Yeah, lying down would be much better.

â€œLook at me, Kismet,â€ he whispered.

Geez. What is it with that voice?

â€œLook at you? Nope, thatâ€™s always trouble. I think Iâ€™ll just stay right where I am, rubbing myself against your throbbing manhood, as they used to say in romance novels.â€

Something about the way heâ€™d said those words, with his old-fashioned manner of speaking and his European accent, made me laugh â€“ in fact, I laughed so hard that he gasped as I vibrated against his erection. Since he rarely sucked in air on purpose, much less allowed anyone to catch him by surprise, I was intrigued; I simply had to look at him.

I turned, and the view was worth the trip.

Heâ€™d tilted his head back, closed his eyes and parted his lips just enough so that the tips of his fangs glistened. His beautiful light blond hair flowed down his chest, soft and touchable. He was dressed in his usual snug black leather pants, and a vibrant blue silk T-shirt clung to his well-toned body, displaying it to perfection.

I studied him, my heart pounding in lustful anticipation. He truly was an unusually beautiful man. He opened his eyes, and I felt myself falling, almost as if the carpet Iâ€™d been standing on had liquefied, and I sank into a blue-green universe. Iâ€™d never been totally sure what color his eyes were. Whatâ€™s the difference between turquoise and aqua, anyway? Obviously arousal brought out the best in his devilish orbs, because they sparkled like gemstones. Or maybe it was a vampire thing. He gave a slow blink and a wicked smile quirked his lips. He slid his arms around my waist and pulled me close for a kiss.

Without any more hesitation I looped my arms around his neck, fitted my body tightly against his and kissed him back. His mouth was wonderful; as he teased his tongue through my lips I opened for him, inviting him to take more. Regardless of any doubts I might have about my relationship with Devereux, our sexual chemistry was never in question.

Part of me was lost in the delicious things his tongue was doing, but another part noticed the fact that we were standing in front of the window for all of Denver to see, and as soon as I thought that, I broke the kiss and nodded towards the glass. â€œMaybe we should take our reunion somewhere more private,â€ I suggested.

My UK publisher, Jo Fletcher Books, is holding a giveaway for 5 copies of Crimson Psyche. To enter go to the website and click on the blog and scroll down to the post about Crimson Psyche to leave a comment. http://www.jofletcherbooks.com 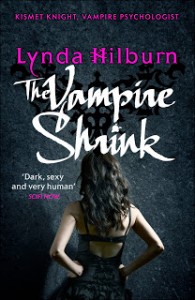 Kismet is smart, witty and attractive. Sheâ€™s respected in her field, successful and prosperous. Sheâ€™s followed all the rules â€“ done everything right. So, whatâ€™s the problem? Her life is empty. Thereâ€™s no passion. No vitality. No excitement.

That is, until a new client introduces Kismet to the vampire underworld, and a drop-dead gorgeous, 800-year-old vampire named Devereux. Kismet isnâ€™t buying the vampire story, but canâ€™t explain why she has such odd reactions and feelings whenever Devereux is near. Kismet is soon forced to open her mind to other possibilities when she is visited in her office by two angry bloodsuckers, who would like nothing better than to challenge Devereux by hurting Kismet.

As Kismet gets pulled deeper and deeper into the vampire subculture, she struggles to hold onto her professional ideas about what is and isnâ€™t â€œreal.â€ The more she finds herself attracted to the charismatic, handsome Devereux, the more out of control her life becomes.

When one of her clients shows up in her office almost completely drained of blood, Kismet finds herself immersed in an ongoing murder investigation. Kismet is questioned by irreverent, handsome FBI profiler Alan Stevens, who warns her that vampires are very real. And one is a murderer. A murder who is after her.

In the midst of all this, Kismet realizes she has feelings for both the vampire and the profiler, but even though she cares for each of the men, facing the reality that vampires exist â€“ along with all the other supernatural insanity she discovers â€“ is enough of a challenge. For now. 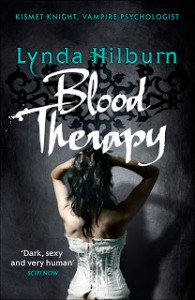 Dr. Kismet Knight and the dark world of vampires are back in this sexy sequel to the wicked rompÂ The Vampire Shrink. Still reeling from her earlier adventures, the spunky, smart, and tough heroine tries to adjust to her new reality–and new undead clientele. Then she discovers a frightening secret about these powerful immortals that further warps her world. Needing to escape, she flees to New York for the American Psychological Association’s conference, where she meets up with hottie FBI Agent Alan Stevens. Unfortunately, he’s not the only blast from the past in the Big Apple: so is Lucifer, the demented tormentor who nearly killed her. As the killer closes in, everyone is rounded up for a shocking finale that no one will survive unscathed. 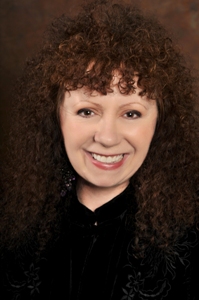 Lynda Hilburn writes paranormal fiction. More specifically, she writes vampire books. After a childhood filled with invisible friends, sightings of dead relatives and a fascination with the occult, turning to the paranormal was a no-brainer. In her other reality, she makes her living as a psychotherapist, hypnotherapist, professional psychic/tarot reader, university instructor and workshop presenter. Her series, Kismet Knight, Vampire Psychologist is being rewritten and will be republished by Quercus Books in the UK and Europe, and by Sterling Publishing/Silver Oak in North America. The UK version of the first book in the series, â€œThe Vampire Shrinkâ€ will be published September, 2011. The North American version a few months later. Book #2 (tentatively titled â€œBlood Therapyâ€), which is a new book, will be published a year later, and book #3 (the book that used to be called â€œDark Harvestâ€) will follow a year later. She also has a short story in the anthology, â€œMammoth Book of Paranormal Romance,â€ called â€œBlood Song.â€ â€œDiary of a Narcissistic Bloodsuckerâ€ and â€œUndead in the Cityâ€ are available through Amazon.com and Smashwords.

I did read the first two books but not the short stories. I may have to go on a quest.

congratulations on your new book