I have two new guest authors this week â€“ the fabulous Nikita Jakz and Alicia Dawn! They are here to talk about the first two books in their My Demon Trilogy. Iâ€™ll hand things over to them nowâ€¦ 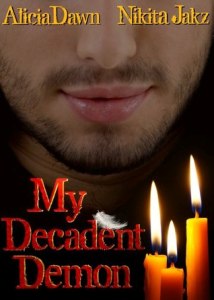 Seraphina Orielle, an angel of divine fire and light, was also an oracle of foresight. Considered adolescent among her peers, she had yet to master her gift of precognition when her first vision came to pass; a captivating male whose destiny was intimately intertwined with her own. Yet he was not of angelic design. In fact, he was very far from it. Tragically, by the time Sera discovered this pivotal detail, he had already attained ownership of her heart.

But not her ability to fleeâ€¦

A hundred years later and Cole Asteroth does whatever the hell he wants. When heâ€™s not busy, that is, with â€˜dirty deeds, done dirt cheapâ€™ for his master. Ornery and sarcastic, he gets his kicks wreaking havoc in the human realm. Oh, and making very un-angelic women beg for his touch. Life is goodâ€¦

Until fate finally catches up with him.

A few weak moments, one too many innocent visitations and the two are entangled all over again. But not as they had been before; things are much more complicated now. And Cole no longer possesses much in the way of faith and forgiveness.

As the estranged lovers struggle with what path to take, they quickly discover that destiny, too, is a reluctant second chance provider. As outside resistance and decadent captivity ensues, can their situation get any more exasperating?

Never did Seraphina foresee herself taking refuge in the underworld. Cole, however, should have. Seraâ€™s kin would never let her go and this was the one place their holier-than-thou feet couldnâ€™t tread. Unfortunately, residing in a realm of vile depravity only adds to his problems. Now he must keep Sera safe from not only her kind, but his as well. Even Coleâ€™s demon is more volatile from the subjection to incessant evil.

When the opportunity arises to solve their dilemma, he jumps at it. But itâ€™s a dangerous mission – and Seraâ€™s riding shotgun. As deadly adventures unfold and all hope seems lost, Cole is forced to search inside himself. With a soul thatâ€™s riddled with more questions than answers, can he find the lifeline they need?

Alicia Dawn was your average 9-5 workalcoholic thatÂ took care of every day business. After 10 long years ofÂ having no life, outside of home and work, she foundÂ Facebook as so many others had. Always having theÂ passion, since she was in the fourth grade, to read andÂ write, she got drawn into the Role Playing world. Living,Â via roleplay, the stories that picked up and continued onÂ a book after it was done. This was a whole new world.Â Loving that the books she had devoured and loved toÂ read were now never ending. She became captivated byÂ all the stories that others with the same passionÂ created, and Role Played out on Facebook. Getting drawnÂ into something that she had never done before, butÂ always in back of her mind wished she could do, AliciaÂ started Role Playing on Facebook in 2010, meeting NikitaÂ Jakz along the way. After a year, she decided to beÂ adventurist and create her own characters. Not unlikeÂ what all authors do, when creating those awesome booksÂ that she had coveted and devoured when they came out.Â Joining a group of independent writers, Cole was born. AÂ year later Nikita Jakz joined the same group and gettingÂ snagged by his story, Seraphina was born.

Born and raised in the Northern Virginia, Nikita Jakz has always loved to write, but it wasn’t until her preteen years that she fell hard for all things romantic and paranormal. She could thank Lestat for that one, as well as for her new-found love of reading. With sci-fi fanatics, literary teachers and writers in her family, it shouldn’t have been a surprise. Waiting tables and bar-tending after high school, she worked hard to earn a degree in Electronic Graphic Design. It was during this period of time that she met her husband. Together they’ve built their crazy life together, ushering in four equally crazy children to enjoy it with. As a stay-at-home-mom she’s quickly become, along with the masses, sucked into the insane world of pop-culture ‘vampire love’ and she couldn’t be more thrilled. First came the book forums, then came the role play groups, which ultimately led her to become a fervent online independent writer. With a couple of her favorite writing partners, she endeavors to share with the world her beloved stories of love, adventure and supernatural wonderment.

Nikita is currently working on a handful of other projects as well, all paranormal romance, to be released as early as next year!

This entry was posted in guest blogger. Bookmark the permalink.