I have a new guest author this week â€“ the fantastic Natalie J. Damschroder! Sheâ€™s here to talk more about her new release and share an excerpt of the book. Iâ€™ll hand things over to her nowâ€¦

Hi, everyone, and thank you so much, Felicity, for hosting me today!

I love writing paranormal romance because I can make stuff up and explore opportunities well outside the boundaries of the real world. I especially like playing with characters with extraordinary abilities, such as in my Goddesses Rising series (which began with Under the Moon. I mean, wouldn’t it be cool to have the ability to move stuff from a distance and quickly heal a boo-boo? To change traffic lights in your favor and grow a luscious garden?

But sometimes those abilities are tested beyond what the goddess ever knew she could do. Riley Kordek, the heroine of my recent release Heavy Metal (book 2 of Goddesses Rising), never knew she was a goddess or why freaky things are happening to her. She’s barely come to terms with the facts when she’s called upon to stretch herself…

Squeaky brakes from the car in front of Riley alerted her that they were stopping again, and she glanced ahead to see what was going on. The overpass they were approaching was under construction. A crane in the grassy median slowly rotated, a dark green I-beam dangling from the crane arm as workers under the bridge used other equipment to haul it into place over the closed left lane.

That was a massive hunk of metal. How much power could she get from that? Enough to do superhero-type things? Like lift equipment off a pinned construction worker? She watched the I-beam swing over the road, ponderous and heavy, and imagined touching it, energy pouring into her, enough to fling an overturned bulldozer off its victim. In her mind, it tumbled end over end, crashing safely to the ground a dozen feet away.

Shouts jerked her out of her imagination. Tires squealed as someone slammed on the brakes, someone else hitting their horn as the I-beam swung wildly. Groaning metal echoed over everything. More shouts. Riley gaped, watching through her windshield as the I-beam tilted and began to slide in its harness. Men scattered on one side, others struggling to control it from the opposite. A clang reverberated so deep and loud it vibrated Rileyâ€™s car. The I-beam had collided with some kind of forklift-like vehicle, and it tipped, in slow motion but still far too fast.

â€œOh, my God.â€ Riley clutched the wheel, frozen, staring at the hard hat and waving arm of the man now trapped under the forklift. Whatâ€¦ Had she done that? Had her fantasies somehow pulled the I-beam toward her?

Doors opened, and people climbed out of their cars. A few pulled out phones, some assholes clearly taking photos or video, while others put the phones to their ears, probably calling 911.

Riley numbly put the Beetle in park and shut off the ignition. Her legs shook as she opened the door and tried to stand. She wrapped her left arm over the top of the door to keep herself upright, her eyes locked on the man on the ground, his coworkers struggling to move the machine on top of him.

A familiar shout a couple dozen feet away. She tore her gaze away and found Sam, motioning for her. She couldnâ€™t move, couldnâ€™t comprehend what he wanted.

â€œCome on!â€ He waved again, then turned and ran toward the accident.

Something snapped in Rileyâ€™s brain. She hadnâ€™t noticed that sound was muffled until she could suddenly hear again, excited chatter and revving engines and shouting voices. Colors went from tinted grays back to brilliant oranges and reds, gleaming blacks and blues. She took off, dashing around people but swerving close to their cars. Light flashed off chrome trim and wire antennas. Her fingers brushed metal as she went, something other than conscious recognition guiding her touch to the smallest bits of her source within reach.

Small infusions of strength fed her muscles, her pounding heart and aching lungs, and by the time she reached Samâ€™s side, her shock had been displaced by determination.

â€œThere.â€ Sam turned his attention from the crowd to the forklift. It lay on its side, canted where the body jutted out wider than the base, the manâ€™s entire lower half pinned near the spot where metal met concrete.

â€œIâ€™ll distract them.â€ He didnâ€™t wait for her to respond, didnâ€™t ask if she was up for it, just assumed she was.

She firmed her jaw, clenched her fists, and strode after him. She damn well would be up for this. Especially if sheâ€™d caused it.

No. Guilt wouldnâ€™t help. She banished the idea and slipped between barrels. Under the shadow of the overpass, the moans and thumps of vehicles speeding above echoed around them, covering shouted orders among the crew. The crane operator and some of the workers had gotten the I-beam safely to bare ground, half on the grass, half on the cracked concrete of the road. All the workers gathered around the trapped man. A couple tried to wedge a long chunk of concrete under the forklift, but it wouldnâ€™t fit. Hands shoved at the tipped-over lift, but of course, no one was strong enough to budge it, and the positioning made it impossible to get enough people around it to combine their efforts.

Sam squeezed through the crowd, calling out instructions with enough authority that no one questioned him. Riley watched for a moment as they folded cloth to put under the guyâ€™s head, held a water bottle for him to drink from, and bent close to Sam when he asked the guy questions.

When everyoneâ€™s attention was on Sam and the injured man, Riley hurried to the equipment. Her ridiculous, arrogant fantasy spun through her mind. She didnâ€™t know if she could even raise the small forklift. Her bare hands landed on the cold metal, followed by the familiar sensation of everything about her body becoming more, and relief filled her. Now to figure out the best way to do this.

She turned her back to the machine and bent her knees, bracing herself against it and curling her hands around a lip above the gas cap. She closed her eyes, willing strength into her legs. For the first time, she concentrated on drawing energy from the metal. No, not from it. Through it. She could sense it, like flowing water except totally insubstantial, detected only in an eerie sense of movement out of the metal into her hands. She clenched her jaw, tightened her muscles, and heaved, shoving with her legs and pulling energy at the same time.

The forklift rose. Only a few inches, but Sam shouted something, other people yelled, something scraped across the ground, and the forklift became suddenly heavier. She strained not to let it drop and opened her eyes. Several feet of empty space between the machine and the crowd gave her permission to let go. But that would call attention to her, so she held on. Every muscle screamed so hard she almost gave voice to the pain, her mouth opening wide. But the sound only vibrated in her ears, externally silent. She slowly bent her legs and lowered the machine to the ground. As soon as she released it, she collapsed. 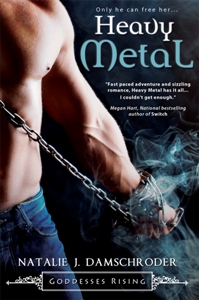 The world is not what Riley Kordek imagined. On the run from those whoâ€™ve targeted her, all Riley wants is a chance to figure out her new ability to bend metalâ€™s energy. When a hot guy who knows more than he should helps her escape her attackers, she thinks she mightâ€™ve found someone who can lead her to the answers she needs.

Three years ago, Sam Remington walked away from his employer and the woman he loved, and now, all heâ€™s looking to do is fill the gaping hole left behind. Except, when Sam takes Riley to the Society for Goddess Education and Defense, the stakes rise beyond what either of them could have imagined.

After being alone for so long, falling for Sam would be far too easyâ€”and far too painful, once his old flame calls needing his help. Worse, Riley uncovers a plot with disastrous ramifications not only for herself, but for Sam and the people he lovesâ€”and potentially every goddess in the country.

Natalie J. Damschroder is an award-winning author of contemporary and paranormal romanceâ€”Love with a Shot of Adrenaline. She sold her first book in 1999, and 2013 will see the publication of her 14th novel. She grew up in Massachusetts and loves the New England Patriots more than anything. (Except her family. And writing and reading. And popcorn.) When she’s not writing, revising, proofreading, or promoting her work, she does freelance editing and works part time as a chiropractic assistant. She and her husband have two daughters she’s dubbed “the anti-teenagers,” one of whom is also a novelist. (The other one prefers math. Smart kid. Practical.)

You can learn more about Natalie and her books at her website, Goodreads, Twitter, and Facebook. She blogs with a number of fantastic romance authors at Everybody Needs a Little Romance and just to hear herself talk at Indulge Yourself.

Thanks so much for having me, Felicity!