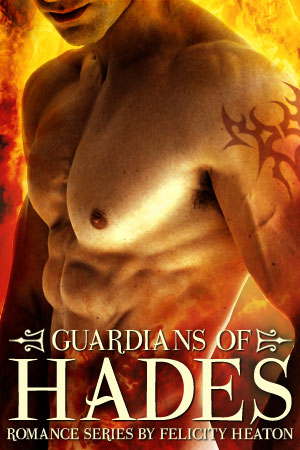 I’ve had a few people ask about what’s happening with my Guardians of Hades series that I was chatting about so much on my blog recently. Well, now that I’ve spent the better part of my day printing driving routes and maps for my impending trip around New Zealand, I can get back to work and update you all on this paranormal romance series all about seven very sexy Greek gods, who just happen to be the sons of Hades and Persephone, and are our only hope of surviving some cataclysmic event that is about to happen…

I’ve completed the first draft of the first book, which features the second eldest brother as the hero. Originally, I was writing this series with a view to pitching it to my agent and then having her tout it around NYC trying to find a home for it. That changed when I realised that I am extremely attached to this series. I’ve been working on it for 4 years already and I don’t want to see it altered in any way from how I envisage it. The trouble is, if a publisher decides after three books that the series is no longer for them, they will probably make me change things about it to have it end at book three, or four, or whatever. This is a seven book series and I would be gutted if it was cut short or altered from my vision in any way. So, I’ll be keeping it firmly in my hands and most likely self-publishing it instead, as I know I can get it to run to all seven books that way. I am now writing the Bonded by Blood series for my agent instead.

If you’re wondering when the first Guardians of Hades series book will come out, I’m currently aiming for a release date of late 2013 as I want to write the second and third book before I release the first book, and have them released one after the other. If you have any questions about the series, please don’t be shy! Feel free to ask them in the comments section or drop me an email.

Megan woke on the couch, stiff and sore, and very irritable and tired. Her gaze scanned the unfamiliar apartment and she frowned as everything came back to her. It explained her lingering fatigue but not the tightness in her back. She grimaced when she slowly sat up and her neck cracked. It ached and she rubbed it, trying to ease the knot in her spine. It made her head pound and she glared at the crimson couch. Expensive furniture shouldnâ€™t be so uncomfortable. She kneaded her neck and shoulders, and glanced towards the windows. Was it dawn or evening? She couldnâ€™t tell. The golden sky could be either.

Stifling a yawn, Megan rose from the couch. She pressed her hands into her back and arched forwards, trying to crack at least some of it into place. The thumping in her heart worsened.

If it was dawn, those men would come back soon.

She trudged around the couch and crossed the living room to the open wall of the bedroom, intending to check the patient. The bed was empty. She blinked several times, frowning the whole time and trying to wake up. The man was gone. Great. She wasnâ€™t sure what Daimon would do to her if she had lost his brother, but she was certain it would be painful.

There was a clunk and then the sound of running water.

Megan turned around to face the living room and followed the sound to a room on her right. The oak door was open. She stopped in front of it and her eyes widened.

Her heart pounded harder than her head and she told herself to look away.

Her eyes were having none of it. They remained glued on the tall, luscious, nude warrior in the double-width shower cubicle. He had his back to her, sinewy muscles shifting with each move he made as he ran his hands over his overlong dark hair, slicking it away from his face. Oh my. Her cheeks scalded and her body followed suit, heating to a thousand degrees. The man was a god, from his long muscular legs, to the firm globes of his backside, right up to his strong back and powerful arms.

The lower portion of the glass door steamed up and stole away a slice of his beauty but still left the rest of him on show. And what a delicious view it was.

Water ran over his shoulders, chasing in rivulets between muscles that she wanted to run her fingers over again.

She had to leave.

Megan frowned. Not yet. Just a few seconds longer. It wasnâ€™t every day, or even every year, that she got to see living perfection standing only a metre from her. Who knew when the next opportunity to ogle a real life gorgeous nude man would come along? Probably never.

He pressed his palms into the tiles and hung his head forwards, under the steaming jet. Water ran over his back in a torrent. He had a sexy back with broad strong shoulders that tapered perfectly into a narrow waist.

His fist slammed into the wall, cracking tiles, and Megan jumped. Time to leave him alone.

He began to turn around.

Megan leapt backwards into the living room and panicked.

She raced around the couch and sat in the middle of it with her hands in her lap.

Stared at the far wall and the dark screen of the huge television.

The shower switched off.

Megan panicked again. She quickly lay down on the couch and closed her eyes. What the heck was she doing? Pretending to be asleep? She wasnâ€™t sure why she did it but for some reason it seemed better than him catching her awake.

She waited, doing her best to look like she was sleeping. She wasnâ€™t sure what to expect.

He muttered a few gruff things she didnâ€™t catch and then she heard him enter the room. Her heart thumped. He was still for so long that she wondered what he was doing, and then he moved again and she swore she could feel the heat of his gaze on her as he stood behind the couch. He lingered there for long seconds and she was tempted to feign waking so she could look up at him and see his beautiful dark eyes. Would there be red in them as he watched her? She wanted to know why his eyes did that at times, how they could do that.

He moved away before she could pretend to wake and she cracked an eye open. He was in his bedroom, wearing only a white towel around his waist and looking just as delicious as he had in the shower. He turned around and she quickly relaxed into the cushion again, continuing her charade.

Megan tensed when he stopped close to her again. She could barely breathe, hyper-aware of him where he stood behind the couch, towering over her. A droplet of water landed on her bare right arm and goose bumps broke out along its length.

Her skin prickled and she swore he was close to touching her, could feel his hand glide up her arm towards her face.

Megan rolled onto her back and slowly opened her eyes, feigning waking. She lifted her gaze to him and he stole her breath. He stood over her, his hair wet and slicked back. Drops of water rolled down his chiselled torso. He stared down at her. It was the first time she had seen him fully in good light. He was stunning, his sculpted cheeks and the cut line of his jaw making him appear rough but oh-so-masculine. Everything about him made him look like a warrior, a man of strength and action, a man who made her quiver in her core. The fine layer of stubble coating his jaw only added to his intense masculinity and he had the most sensual mouth she had ever seen. Her gaze locked with his and she shivered. His dark eyes were as incredible as she remembered them and striking with the flecks of red and gold that danced against a deep brown backdrop.

Tension radiated between them but Megan didnâ€™t know what to say.

She opened her mouth to speak but no sound came out, so she swallowed to wet her throat.

â€œWhat are you doing in my apartment?â€ he said, voice a deep rumble that cranked up the heat inside her.

Still looking forward to the series?

This entry was posted in 2013 releases, Guardians of Hades, paranormal romance. Bookmark the permalink.
Sort by:   newest | oldest | most voted

Â I’m at the mercy of the Vampirerotique boys. I have to get their books written first, and then I have to write the next Her Angel book while I’m also working on this series, and don’t ask when I’m going to fit in a Vampires Realm book!

Oh my God, that’s so unfair, I was really getting in that ( I forgot it was a snippet/tease) I was so engrossed then it ended…nooooooooo want more please…. Ah it’s a long time until the book is released but from what I read its definitely wrth the wait, you never disappoint Felcity.Thanks.

This is a must read series for me!!! Thanks for sharing the excerpt!!