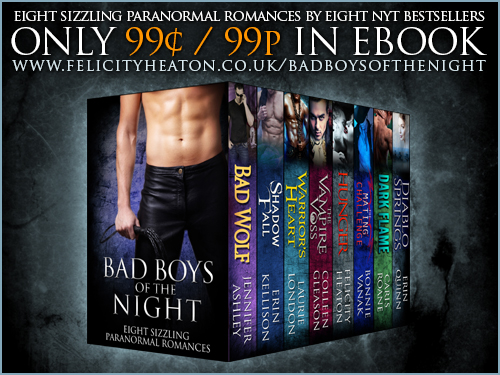 I have a new release and a fantastic giveaway to celebrate it!

Here’s more about this fantastic eight book boxed set, including an excerpt from my book in the set, HUNGER!

PLUS GIVEAWAY: Don’t forget to enter my giveaway I’m running until February 28th on my website too! You can enter here: http://www.felicityheaton.com/bad-boys-of-the-night-paranormal-romance-boxed-set.php

Bad Boys of the Night: Eight Sizzling Paranormal Romances is available from Amazon Kindle, Kobo Books, Barnes and Noble Nook, Apple iBooks stores and other retailers. Find the links to your preferred retailer at: http://www.felicityheaton.com/bad-boys-of-the-night-paranormal-romance-boxed-set.php

EXCERPT FROM HUNGER BY FELICITY HEATON

The remaining three weakling vampires snarled and launched themselves as one at her. Eve did her best to block each blow they threw, her forearms taking the brunt of their wrath, and tried to get some attacks of her own in. They were relentless, driving her backwards, crowding her and making it impossible for her to escape.

She bit her tongue to silence her cries as claws cut and fists slammed, each blow weakening her a little more.

A cry escaped her as sharp talons sliced through her right biceps and she dropped her only weapon.

A deep male voice rolled over her like a storm, his foreign tongue dark and sinister.

The three vampires crowding her eased back and turned as one to face the newcomer. Eve withdrew, clutching her arm. Blood spilled from between her fingers and the ever-present hunger grew worse, bringing out her fangs as it demanded she taste the sweet, coppery liquid.

A fifth male melted out of the shadows at the entrance of the club, a six-foot-five wall of lethal muscle and deadly grace, his face obscured by the hood of his oversized black sweatshirt. Calm laced with malice rolled off him and she felt his gaze flicker to her.

A hot shiver went through her in response to the intense feeling, the incredible awareness that shot an arrow straight through her heart and made the rest of the room fall away in an instant, drawing every shred of her focus to him.

He calmly set his black duffle down on the bar and strode forwards with purpose, his black army boots loud on the wooden floor. She felt his eyes leave her. The room crashed back into existence and air rushed into her lungs again.

The low lights flickered over the lower half of his face, giving tantalising glimpses of firm, sensual lips and a defined jaw. The corner of those lips quirked, a split-second shift that she would have missed had she not been staring so intently at them.

Panic began as a low thrumming in her belly, a turbulent swirling that made her take another step back for each one he advanced, placing more distance between them. The malice and darkness he emanated grew stronger and her instincts warned her away, screamed that she stood no chance against this newcomer.

He was stronger than the other four combined.

Her panic exploded into outright fear as the man reached behind his back, whipped out a black pistol and fired off a round, nailing the vampire she had tagged as the leader between his eyes. His head snapped backwards, blood spraying from the gaping wound in the back of his skull, and he fell into a table, crushing it under him.

The other two rushed the man.

They didn’t stand a chance.

He took the first out with lethal efficiency, kicking him hard in the balls and then catching him with a diagonal uppercut as he doubled over, snapping his neck.

Eve stood frozen to the spot, unsure what to make of the deadly new combatant, and unsure whether he was friend or foe.

She hoped to God he wasn’t foe.

She wasn’t even sure he was a vampire. Her scrambled senses said that he was but he didn’t fight like any vampire she had ever met. None of them had used guns for a start, and none of them fought dirty as this man did.

The remaining male bravely faced off against him, brandishing both of her fallen knives.

It didn’t help him.

The huge male cupped his hands and stepped forwards, nothing more than a blur as he closed the distance between him and the remaining vampire. He slapped his hands over the vampire’s ears, the crack as they connected startling her into moving, placing even more distance between them. The vampire unleashed an agonised snarl and thrust with one of the blades. The man sidestepped, caught his arm and twisted it hard, bringing his other hand down in a devastating blow that shattered the bone.

The man calmly grabbed him by his throat, pressed his free hand against his face, and shoved forwards, snapping his head backwards and breaking his neck.

Eve took another step backwards, towards the door to the back rooms. Maybe she should have made a break for the exit while the man had been occupied with neatly defeating three vampires in under three minutes.

He advanced on her, the sense of malice coming from him not abating. If anything, it was getting stronger.

When he reached the gunshot victim, he casually crouched over him and ruthlessly snapped his neck, twisting hard enough that the crack was audible and sickening, making her own spine ache in response and her stomach turn. He rose to his feet, his backdrop a vision of darkness as the vampires began to turn to ashes, and approached her, silent but not wary.

Confidence and danger flowed from him, as if those two words were created for him alone.

A man bred for the purpose of killing.

She had met men like him in her years as a hunter, but not on his level.

Eve backed off another step and hit the wall beside the door to the back rooms.

The man continued his advance, each step closer he came only making her more aware of how immense he was as she had to tilt her head back to keep her unsteady gaze on what she could see of his face.

Oneiric appeared beside her and the man halted his approach.

“I dealt with all the ones out the back. Are you alright?” Oneiric said in a low voice, his crimson gaze never leaving the newcomer.

Eve kept her eyes locked on him too and nodded. “Sustained a few injuries but they’re healing. I took one down, and… well… he handled the rest. Any idea what they wanted?”

She waited, curious and a little afraid, as the male shifted his focus to Oneiric.

“I imagine it was the usual grudge against our kind. My ones had a few choice things to say about us.” Oneiric moved closer to her, a protective gesture by the vampire who called himself her father, one that she appreciated.

“It must get tiring. You think they would get bored of killing themselves.” She glanced at him, catching his brief smile.

They had spent hours discussing how foolish the weakling vampires were, those with muddied blood that made them far less powerful than vampires of the seven pure bloodlines. They often attacked pureblood vampires. Oneiric had called it suicide. She had to agree. As a hunter, she had seen weaklings picking fights with purebloods and it always ended the same. A gruesome death for the weakling.

She pressed her palms against the wall behind her, clinging to it for support as her tired body threatened to give out under the stress of the fight and the presence of the assassin.

Whenever his focus leaped to her, she felt the full extent of his power and it pressed down on her. Oneiric had warned such a thing would happen around stronger members of the seven pure bloodlines and she hadn’t believed him until now.

This vampire was more powerful than any she had met. What did he want with her father? Had he just been passing and had sensed the fight, and had come to help them? Or did he have business at the club? He would make one hell of a bouncer.

Her father eyed the ashes of the vampires and then the man before them.

“I thought Lilith would be the one to come for Eve,” Oneiric said and Eve swallowed hard.

This man couldn’t possibly be her escort.

She wasn’t going anywhere with him.

The towering male said nothing in response. He simply stuck his gun down the back of his black jeans and then casually pushed his hood back.

Eve’s breath left her in a rush.

Piercing glacial blue eyes held fast on Oneiric, the pale white-blond eyebrows above them drawing down, causing them to narrow and intensify. The man was handsome, not at all as she had expected, but radiated danger too, a sense of deadliness that his appearance could easily belie.

She had never thought she would face a vampire and think they were beautiful. Her body heated, her blood turning to liquid fire at the sight of him, a startling reaction that she couldn’t control.

He glanced at her and then his cold eyes shifted back to Oneiric.

Eve could only stare at the contradiction before her. No doubt he made the perfect assassin. His looks distracted her from the darker side she could feel in him—the vast coldness—and the dangerous side she had witnessed—the lethal, efficient killer. His pale eyes glittered with intelligence as they held Oneiric’s, filled with a calculating edge that made her feel he was five steps ahead of them, already predicting the outcome of every move he made or thing he said.

Here was the kind of man that nothing slipped past. Not even the smallest detail. He was dangerous because of that, and confident too. He knew himself and his skills, and that he could take down both Oneiric and her without breaking a metaphorical sweat. That scared her a little, but didn’t stop her from feeling drawn to him. If anything, it only pulled her deeper under his spell.

The man he was inside lent a rough edge to his beauty that made him masculine. Probably the closest definition to male she had ever met. A feral, deadly devil wrapped in the guise of an angel.

She had never seen anything like him, and knew she never would again.

Grab the boxed set for just $0.99 to read this story and seven others…