I have a new guest author this week â€“ the wonderful Linda Acaster! Sheâ€™s here to talk about the first book in her series and share an excerpt! Iâ€™ll hand things over to her nowâ€¦

The British have always embraced the paranormal

The creepy â€˜Oh, Whistle, And Iâ€™ll Come To You, My Ladâ€™ was delivered unto the world in 1904 by MR James, and Charles Dickens is renowned for his â€˜The Signal-Manâ€™ (1866) which sprang from a true event five years earlier. Every tourist town in the country offers a book detailing supernatural happenings in the locality, and who wouldnâ€™t travel toScotlandwithout attempting to view â€˜Nessieâ€™, The Loch Ness Monster?

In my Torc of Moonlight trilogy I focus on paranormal protectors of a different kind, the mere-maids, the goddesses of the water which came to literary prominence in the Arthurian legends: the celebrated Lady of the Lake whose arm broke the surface of the pool to reach for the tossed sword Excalibur and accept it as a devotional gift to powers beyond mortal knowledge.

Despite being wrapped in mediaeval armour and chivalrous exploits, the act embodied in the story dates back well before recorded time. British museums are stuffed with recovered artefacts, many military due to their high cost of production, which had been ceremonially deposited in water courses. Each spring, well and often stream, would have a protective female deity, and often a female priestess who interceded between the realms of mortals and enchantment.

And these are no fancy tales from days of yore. When Regency ladies and their beaus visited Bath or Harrogate to take the waters they would pass over a silver coin and in return take a cup from an old woman who resided by the spring. Derbyshire is renowned for its well-dressing festivals which, despite their Christian overtones, harks to a pagan past.Yorkshire, the county of my birth and the setting of my trilogy, has more springs named Lady Well than anywhere in the country, and many of them hold silver coins left by devotees. Donâ€™t you cast coins into a â€˜wishing wellâ€™ to invoke good luck? Who are you expecting to answer?

In Torc of Moonlight Nick becomes obsessed with Alice, a history student determined to find the shrine to a forgotten Celtic water deity. Together they decipher the cluesAlice unearths, but as Nick luxuriates in their nights of sensual pleasure heâ€™s in denial of other, darker visions that impinge on his days. To tellAlice will make her flee him. To stay silent could kill her. 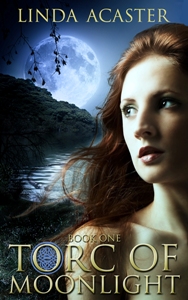 ‘Stay away from me. Don’t you understand? People close to me die.’

Nick believes Alice is overreacting. She’s been unlucky in her life, that’s all. Coincidences – they happen all the time.

It had been coincidence that they’d locked gazes during the lecture, a trick of the light that had lifted her auburn hair. But is it coincidence that someone, something, is distancing him from his friends as the need to possess Alice builds?

Drawn into her obsession with finding a shrine to a Celtic water goddess, and drowning in sensual pleasure, Nick is in denial… until he sees a jewelled sword fade in his hand and knows that he, or theÂ thingÂ that shadows him, has held it, and bloodied it, long ago.

To tell Alice will make her flee. To stay silent could kill her.

Â For a moment he thought he lay in his own bed in his own room, but the light was too dim, and there was a tinkling that sounded like water falling on rock. The scents of forest flowers assailed him from the pillow and he spread his limbs, luxuriating in the warmth that wasAliceâ€™s bed. The only imperfection was thatAlicewas not sharing it with him.

Raising himself on one elbow, Nick pushed back the duvet. Wrapped in a white kimono, she was sitting at her workstation, the light from the laptop screen sheening her a ghostly silver-grey.

His gaze caressed the rippling fall of her auburn hair, the gentle curve of her shoulders, a pale leg extending into the shadow beneath the table. He wanted to capture her in that pose as a photograph, to look at her hour after hour and not sense the passing of time. Yet he wanted her with him, now, clasped in his arms, the heat of his passion burning a path through her soul.

Her hand faltered. Her head inclined, and she swivelled her chair to smile at him as he reached out a hand towards her. Alissssâ€¦

Her brisk salutation broke the charged atmosphere, the forest scents retreating as if from a perfumed candle snuffed too soon. He blinked, rubbing at his face surprised to feel a growth of sharp stubble.

He heard her chuckle at his theatrics. â€˜If I remember rightly, I was kicked out of bed.â€™

He sat up, his expression full of mock horror â€“ â€˜An aberrationâ€™ â€“ and watched amusement dance in her eyes.

â€˜Some sort of dream. Well, more nightmare, I think. It was deep, whatever it was. You wouldnâ€™t rouse.â€™

He frowned at her as she turned back to her laptop. He didnâ€™t recall any dream, much less a nightmare. But that was the trouble, wasnâ€™t it? Memories were becoming fragmented. Like that jewelled sword heâ€™d seen clasped in his hand. Sometimes memories didnâ€™t seem like his at all. 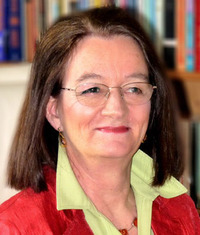 Linda Acaster is the author of four novels and over seventy short stories in a variety of genres. Her Reading A Writerâ€™s Mind has been acclaimed as a great teaching aid for writers of short fiction, and her Native American historical Beneath The Shining Mountains continues to be her bestseller. The ongoing Torc of Moonlight trilogy demanded to be written while she was producing illustrated historical walks for a regional newspaper. Catch the novel, and connect with her at:

Thanks for inviting me, Felicity. It’s lovely to be here. If anyone wants to comment or ask a question I’ll be returning to answer.

Thanks to everyone for reading.

Buxton, the Bath of the North, is also an ancient sacred place and of course home to the world famous Buxton Spring waters. The great bath at Bath is amazing. These spots do have a certain atmosphere.
Are there sacred springs and wells in the USA? Are the geysers in Yellowstone sacred?

Nice place, Buxton, but it always rains when we visit! Sacred springs in the USA? I don’t know. They would be tied to the lore and culture of the original inhabitants, and to their languages. Anyone want to contribute any info here?

Lovely blog, Felicity! Super article, Linda – I’ve tweeted it. The Lady of the Lake, oh yes! MR James’s ‘Casting the Runes’ is another super-creepy, paranormal short story. I really enjoyed your ‘Torc of Moonlight’ and am looking forward to the next.
Where is the nearest sacred water shrine to you, Linda?

Guest
Linda Acaster
Share On TwitterShare On Google
Actually, it’s about four miles away. I recall it as a soggy field, but the ‘older’ ladies of the village remembered taking water from a stepped well. And come the summer solstice those looking for husbands would follow folklore and at dawn walk round it three times, then peer into the water at sunrise to see their ‘true love’. Which was some going as this well is next to church property! Duly excavated, soggy field is now a blooming field, with a three-stepped well-head of stone and crystal water. For some unknown reason the parish has erected a nursery rhyme… Read more »
Vote Up0Vote Down

I’ve thrown coins in lots of wishing wells, and scared springs, including the one at Bath (Aquae Sulis). I’m glad they put a thorn hedge round the site.

Been there! A spectacular place. I wonder how the Celts coped with being kicked out by the Romans? I noted, rather wryly, that they dare not discard the goddess’ name, and referred to her as Sulis Minerva of the water (aquae).

Newtondale Spring (which features in Torc of Moonlight) holds the same chemical properties. Seeing it pouring golden from the rockface was a magical moment I shall not forget.

Guest
Susan
Share On TwitterShare On Google
Do most Scots have Celtic blood? I was trying to remember if it’s the Scots and Irish that do. I’ve walked the Roman Wall between Scotland and England when I lived in North Yorkshire. How I loved that area. So beautiful. I can understand why the paranormal is so popular in Britain with all the history and ancient lands. It just has a quiet spirit about it but makes you think about all that might have happened in those quiet places like the lonely Roman road as well. Could be lots of demons in the land!
Vote Up0Vote Down

Guest
Linda Acaster
Share On TwitterShare On Google
Hi Susan, thanks for coming by. The Scots and Irish would certainly say they do, but I’d say it is now more a culture than a ‘blood’ if you are talking about whole peoples. There was, originally, little or no difference in the inhabitants of what now makes up the separate countries United Kingdom and Eire, but the British mainland up to what is now the borderlands between England and Scotland saw the most influxes, from the ‘Romans’ (most of whom had never seen Italy, never mind Rome), to Angles, Jutes, Saxons, Vikings – all of whom settled and integrated,… Read more »
Vote Up0Vote Down

If The Bull at the Gate is anything like as good as Torc of Moonlight, it’ll be a damned good read. Looking forward to the launch, Linda. And thanks for this interesting piece on the Brits’ interest in the paranormal. Enjoyed it.