I have a new guest blogger this week. Alexandra Anthony is at my blog to introduce you all to her new vampire romance book, Tempted!

Here’s more about the book, and a juicy excerpt… 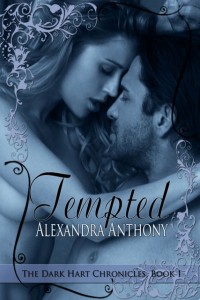 When personal assistant Savannah Wood lands a dream job with up and coming rock star Nick Hart, it seems too good to be true. He’s devastatingly handsome, reserved and charming…but he has a secret he’s determined to keep.

Their attraction to one another is immediate and Savannah is determined to keep a professional relationship between them.Â She’s been burned before and has no desire to reopen old wounds.

The lines between professional and personal begin to blur when Savannah finds out Nick’s secret: he’s a century old vampire with a painful past.Â He’s also hesitant to open himself up to her, yet they find their temptation to one another is stronger than either can resist.

The paparazzi, a string of murders andÂ cryptic, ominous letters threaten their budding relationship. Will their attraction and love be enough to keep them togetherâ€¦or will it tear them apart?

Rain dripped from his raven black hair to run in rivulets down the sharp planes of his handsome face.Â  His dark eyes were luminous, glowing with passion as he stood before me, both hands bracing the doorframe.

â€œNickâ€¦â€ I whispered.Â  I took a shaky step backwards as he strode across the threshold forcefully and took my face in his hands.Â  Our eyes met for the briefest of moments before he lowered his head to capture my lips in a toe-curling kiss, his tongue searching the contours of my mouth.Â  Much too soon he pulled away, his teeth tugging at my lower lip.Â  His fingers stroked down the length of my neck, cold and wet against my skin.Â  My body trembled in response and when I raised my hands to embrace him, he stopped me and held them in his firm grip.

â€œI told myself I wouldnâ€™t do this, Savannah.Â  I know I promised to give you your space and that Iâ€™d be patient.Â  You can see how well that worked.Â  So here I am, standing here in front of you.Â  I wanted it to be differentâ€¦I wanted to do this right.â€Â  He closed his eyes and breathed deeply.Â  He dragged me closer until I was pressed against the solid wall of his chest, soaking my t-shirt with rainwater.Â  â€œBut I canâ€™t do this anymore.Â  I canâ€™t lie to myself and pretend Iâ€™m all right with just being friends.Â  I fucking want you.â€

His words ignited a fire deep within me, stroking the slow simmer that had been building all week.Â  When he continued, his voice was husky.Â  â€œI donâ€™t want to talk and I donâ€™t want to think if itâ€™s right or wrong.Â  Iâ€™ll deal with the fallout tomorrow, but nowâ€¦now I want you more than I can put into words.â€

His hands released mine and he cradled my face in his hands.Â  His soft mouth whispered over my lips and the curve of my jaw.Â  Powerless to think clearly, I simply lost myself in him and the emotion heâ€™d unleashed inside of me.Â  He made me feel cherished and desired, as if I was the only woman alive.Â  Keeping myself emotionally unavailable had its drawbacks and I was almost desperate to feel connected to him.Â  Unable to hold back when his lips tentatively covered mine again, I responded shamelessly.Â  I slowly traced the outline of his lips with the tip of my tongue.Â  His body reacted immediately to my unexpected reaction, the front of his rain sodden pants bulging.

“You’re soaked,” I brushed his wet hair back from his forehead.Â  My eyes followed every line on his face, over his cheekbones and his full lips.Â  As I studied him, I wondered fleetingly if once we made love, the attraction would be gone.Â  Maybe I could fuck him out of my mind.

If only it was that easy, Savannah.

The corner of his mouth twitched.Â  His head tipped back under my touch and the weight of my stare, baring his long neck to me.Â  â€œThen you should undress me, love.â€

Drawing in an unsteady breath, my hands didnâ€™t waver as I swiftly unzipped his pants and flicked open the button of his dress pants.Â  They fell heavily around his feet in a wet heap as my fingers pushed at his suit jacket, easing it over his broad shoulders.Â  All that separated us was his dress shirt and my faded t-shirt.

When he swept me into his arms and carried me up the stairs to my bedroom, I didnâ€™t offer any challenge.Â  He swaggered across the room, laying me across the bed in one fluid motion.Â  My hooded eyes devoured him as stood before me, roughly tugging off his tie and dropping it carelessly on the bed beside of me.Â  His agile fingers slid over his dress shirt, each button slowly falling open to reveal a sliver more of his pale chest until it draped open at each side, his rippled abdomen shadowed in the darkness of the room.

My heart was racing as I crawled to the edge of the bed.Â  Reaching out to him, my hands twisted into each side of his shirt and I tugged him against me.Â  Our bodies collided and our mouths met impatiently, the fiery caress of his lips searing through me until I was afraid nothing would be left of me but ash.

His hands tangled in my hair our kiss deepened.Â  He was unrelenting but in control, sexual but sensual.Â  His taste on my tongue was mindless and drugging, leaving me breathless and longing for more.

Nick eased me back onto the bed, hovering lithely above me.Â  As his fingers began a provocative path down my neck and over the curve of my breast, my hands slipped under his shirt and dragged down the flexing planes of his back, cupping his tight ass and dragging his hips to mine.Â  Every inch of our bodies molded tightly together and the air around us seemed to shimmer, growing taut with anticipation.Â  It seemed we were both longing to explore what weâ€™d denied ourselves of for so long.

“I’m not going to lie.Â  Iâ€™ve wanted this since the first moment I saw you,” Nick rasped against my ear.Â  His tongue licked over the shell, causing a shiver to run down my spine.Â  “I couldn’t take my eyes off of you.”

His voice and sensual words caused my head to arch back into the bed.Â  “I wanted it too.Â  More than anything,” I whispered softly.Â  My fingers combed through his damp hair, his delicious spicy scent overpowering me.

Swallowing back a strangled groan, he pulled away and shrugged out of his shirt.Â  My trembling fingers stroked over his sculpted chest and down the flexing muscle of his arm, absently tracing over the large tattoo on his upper bicep.Â  I finally let them drift over each raised ridge of his stomach, my hands continuing their unhurried exploration.Â  He was flawlessly beautiful.Â  His pale body was long, hard and powerful.Â  He was more perfect than I ever could have imagined. 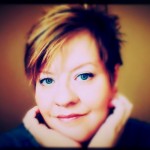 About Alexandra Anthony
Alexandra lives in the Midwest.Â  She enjoys a steamy romance, a happy ending and isnâ€™t afraid of things that go bump in the night.

To find all of her book and to find out more about the author, visit her at www.alexandra-anthony.com.

Oh,this is so my sort of book Vampires, love em, I liked the excerpt for this book, & it Intrigued me so I had to go and buy it.

I have followed Alexandra since discovering Fated, book one of The Vampire Destiny series and have been a fan since. You know that I have a keen and obsessive interest in sexy vampires, romance, danger and the crazy emotions that go along with the stories. Her newest book Tempted was wonderful. Thanks for having this guest blog. I am truly blessed to have discovered such talented authors! 🙂