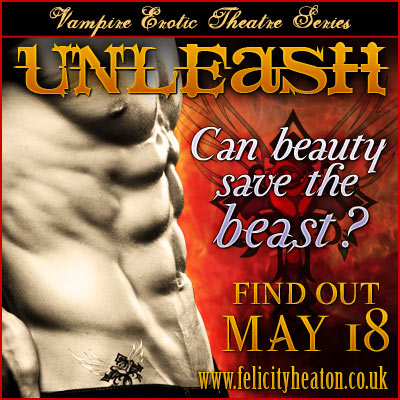 So we’re closing in on May 18th and I’m sure everyone’s patience is beginning to wear thin as you wait for Snow’s book to be released. Today, I’m going to reveal the blurb for this vampire romance novel here at my blog, and give you another tease from the book to keep you all salivating over it. Don’t forget if you sign up to my newsletter / mailing list before April 30th, you’ll receive the first five chapters of Unleash in your inbox, plus you’ll be in with a chance to win signed paperback copies of the novel.

Without further ado, here’s a little insight into what’s in store in Snow’s novel! Oh, and a slightly longer than a tease teaser. 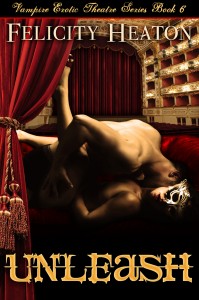 A powerful vampire lost deep in his bloodlust, Snow is a savage animal, mindless with rage and a thirst for violence, and trapped with no hope of awakening from an endless nightmareâ€¦ until a song draws him up from the abyss, restoring his sanity but leaving him haunted by the sweet feminine scent of lilies and snow, and fragmented familiar lyrics.

When the mysterious and beautiful songstress reappears in Snowâ€™s room at Vampirerotique, she awakens a fierce protective streak and stirs dark desires that drive him to claim her as his female, even when he knows his touch will destroy her innocence.

A single forbidden taste is all it takes to unleash emotions in Aurora that she shouldnâ€™t possess, tearing her between duty and desire, and luring her into surrendering to her wildfire passion and embracing hungers that burn so hotly they threaten to consume them both.

One act of kindness can lead to one thousand acts of sin though, each a black mark against the bearerâ€™s soul and another grain of sand that slips through an hourglass. The clock is ticking and time is almost up. Can beauty save the beast?

Snow scrubbed the towel over his hair and then dried himself off with one hand. He swiped his free palm across the clouded mirror, clearing enough to reveal his reflection and the main room of his apartment through the open door behind him.

A twisted form of punishment.

He dropped the damp towel, pressed both palms against the edge of the black counter, and leaned forwards over the sink, staring hard at his reflection.

A face his mother had often called angelic.

The face of a cold-blooded murderer.

Snow growled and slammed his right fist into his face in the mirror, splintering the glass. Fire seared his knuckles and blood instantly ran down the shards of mirror. He pulled his fist back and plucked a sliver of glass from the soft flesh between his index and middle finger, and dropped it into the sink.

The scent of blood compelled him to taste it, stirring the darkness that constantly lurked within him, stalking just beneath the surface, barely restrained.

He rinsed his bloodied knuckles off in the black oval sink and then inspected them. Two of the cuts were deep. He lifted his hand to his face and sucked those two, drawing more blood to the surface. It tasted foul.

His stomach cramped and he spat the blood into the sink and then swiped his tongue across his knuckles to seal the wounds. The bleeding was already slowing. Within a few minutes, his flesh would begin to knit itself back together and heal.

He took a small towel and wrapped it around his hand, and then strolled naked into his bedroom. The bed loomed directly in front of him. He had promised Antoine that he would sleep and he meant to keep that promise.

He veered right, heading for the ebony chest of drawers that lined the black wall there next to his elegant wardrobe. He pulled out one of the smaller drawers at the top, fished a fresh pair of black boxers out, and shut it again. Someone spoke in the hall. Snow paused and listened. Callum was talking to Payne as they walked along the hall towards Callumâ€™s apartment beyond Snowâ€™s one. Discussing children.

Payne had taken responsibility for the witchâ€™s youngling? Snow had never pictured the young vampire as a father. He had always imagined him to be more of a bachelor forever type because of his incubus blood.

Was everyone going to settle down and produce offspring now?

Snow tugged his boxer shorts on. They were all going to leave him behind. Everyone had a female now, something warm and tender in their lives. They were complete.

Where did that leave Snow?

With a frustrated growl, he pulled his wardrobe doors open, grabbed fresh bed linen from the stack he kept at the bottom, and slammed them shut again. What did he care about females? No female in her right mind would want him, and he certainly did not want a female.

He could never trust himself with something so weak and breakable.

He lumbered across his room, bare feet thumping against the wooden floor, and dumped the black linen beside his bed. He stripped the soiled covers off and focused on replacing them with fresh ones to keep his mind off a topic that had often angered him.

He had warred with himself many times about finding a female, debating the pros and cons of such a mission, and all the possible outcomes. It was highly likely that a female would leave him the moment she discovered the ugly truth about him, his bloodlust, and his horrific past.

He would probably react to her betrayal by losing his head to bloodlust and killing her.

He had a tendency to react violently whenever someone sought to hurt him.

Breaking his heart would cause him the ultimate pain.

Snow shook that thought away and smoothed the edges of his black covers down, neatening them. He grabbed his black robe and slung it on, but didnâ€™t bother to fasten the belt.

Darkness swirled inside him like a rising tide that he was powerless to hold back. He breathed slowly, trying to work past the tightening knot in his breast, hoping to calm down before he lost himself again.

He sat on the bed and lay with his back against the pillows and his head against the steel bars of the headboard. He cast a glance at the restraints that rested on the pillows on either side of him. They were there if he needed them and that gave him back a fraction of his control, but didnâ€™t quell his rising bloodlust.

His heart galloped, refusing to heed his attempts to slow it, and he closed his eyes and focused on positive things. The battle between his darker hungers and his desire to remain sane intensified and he breathed harder, drawing deep and filling his lungs with cool air. The soft scent of lilies and snow lingered in that air and his mind drifted to the lyrics of the song.

Calm swept through him, driving back the darkness for a brief second before it surged forwards again, obliterating the sense of peace.

A breeze washed over his bare flesh.

Snow frowned. There were no windows in his room. The breeze carried the unmistakable scent of snow yet it felt warm, and familiar.

Someone was in his apartment. He felt their presence as a soft caress that reached right down to his tainted soul and chased the black shadows from it.

Snow drew in a deeper breath of lily of the valley and snow, the pure feminine scent stirring his body and soothing the tension from it. He held it in his lungs and slowly opened his eyes, settling them directly on the dark beauty standing at the foot of his bed.

She was stunning, with a fall of glossy raven hair that playfully curled around slender shoulders and contrasted against her milky skin, heart-shaped rosy lips, a button nose, and the most incredible yet familiar eyes. They were turquoise around the outside but faded to a brilliant blue at their centres, around the dark mesmerising chasms of her pupils.

A pure white dress clung to dangerous curves and full breasts that would make any manâ€™s eyes linger on her, evoking images in his head that he shouldnâ€™t entertain but couldnâ€™t keep at bay. He had never seen a female like her.

The white layers of her dress criss-crossed over her torso, forming a zigzagging line downwards from between the swell of her creamy breasts to the point above her navel. They flowed from there, free and untamed, drifting down to caress her ankles and her small bare feet.

Are you looking forward to Snow’s book?

Whooooo the blurb is perfect lovebthevteaser

I love u felicity! Lovedddddd it cannot wait for snows book 🙂 well happy

Oh good gods….. Just know from this long (but not long enough 😉 ) teaser that Snow’s book is going to be awesome…. x <3 x

wow! trying to be patient but man! you make it so hard!

This is going to be so good…….