I’m back from my wonderful holiday to Spain. We went to Madrid for a single night, as we were flying to/from Madrid and hubby wanted to go to see Real Madrid play Deportivo (and it turned out they thoroughly beat them 6-1), and then spent 6 nights in beautiful Salamanca, but more about that this weekend when I have time for a proper post. I have come back more tanned, slightly fatter (due to yummy Spanish food), and a bit tireder (although I’m blaming the 6am rising this morning for that when I’m used to getting up around 8-9am!)

It was straight back to work for me, both normal work and writing. I had already printed out Vampire For Christmas, my seasonal paranormal novella that I’ll be releasing in mid-November, and decided it was time for the second draft. As always, I’ve started my second draft with a read through, more as a reader than an editor, checking for flow, story/plot, any problems, and any mishaps. Spotted a few wrong words, extra words, missing words, etc… and a few hiccups, or at least areas that need a bit more explanation or introspection for them to come across right. But, I did finish my initial read through during lunch just now and I came away with a warm fuzzy feeling that I haven’t felt for a while with a first draft story. I do like this one. It’s different to my usual plot/character-driven story with lots of action, etc. This one is lighter, funny in a right way, and I think people will love it as a short seasonal read on a cold winter’s night (or hot summer’s night if you’re down under).

I’ll make a better update post about it when I’ve finished with the second draft. It’s only a novella so I should be done with that by the end of the week.

I have been industrious this morning and have made the cover for my November seasonal release, Vampire For Christmas… 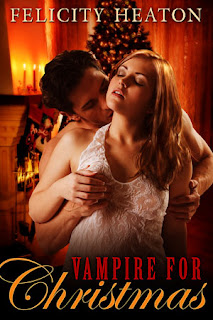 I wanted it to be warm but sexy. I think it sort of accomplishes that. He’s giving her booby a hefty squeeze though. Honk honk. She doesn’t seem to mind.

I haven’t written the blurb for it yet but I’ll get it done soon while the story is still fresh in my mind.

I have a slew of covers to make for next year. It’s good getting back into the act though.

Well, before I could really get into posting about the story I was writing for Christmas, the story is all written in first draft and done. That’s one of the downsides to writing novellas and short stories. As soon as I’ve started writing them, I’ve finished, and I don’t post much about them on my blog because of it.

I started writing the first draft of Vampire for Christmas on Monday, and finished it on Thursday. It’s a vampire romance novella (25000 words) with a sexy vampire hero called Rafe and a sassy vampire hunter heroine, Shannon. They’re partners at a demon hunting agency and as much as Shannon likes to pretend she hates Rafe, she’s falling for him pretty hard. Hard enough that she doesn’t want this last mission to be… well… their last mission. Two years of working with Shannon is enough to have Rafe crazy about her, and he’s determined to show her that they belong together, and to make her overcome her denial about her feelings for him. It takes a slimy monster and some serious soul-searching, but it might just work out good in the end.

I’m pretty pleased with the result. The tension is good, the UST is there too, and the slimy demon provides room for amusement (what’s not funny about a heroic vampire rushing in to save the day only to slide harmlessly off his enemy and land in a pile of goo on his face?). I think readers will enjoy it, and while it has a serious side too (with the heroine overcoming her past horrific encounter with a vampire in order to accept her feelings for Rafe, a less horrific more sexy and evil-to-all-but-Shannon vampire), it’s a warm fuzzy light sort of romance, with a bit of heat thrown in. Perfect for keeping readers warm in winter!

Now all I’ve got to do is edit the beast. It’ll have to sit for a bit before I dive into doing the second draft but the release day for this one is already looming. I want to get it out in November. As soon as I have the cover and blurb, I’ll post it.

Oh, and it’s a stand alone, so will be released under my Felicity Heaton name. Yes, yes, it’s about time we had another F E Heaton release… say something in the Vampires Realm series. Well, that’s what I’m working on next 🙂

I got distracted this weekend blogging about my 11 books in 2011 challenge, and forgot to post about my progress with writing.

Her Warrior Angel is finished in first draft now. I completed it on Wednesday, but it’s not quite perfect. I know I have a few issues with the final chapter to resolve during the second draft, but it’ll be easy to address them then rather than tinker with it now. Better to move on to other projects and let it sit for a bit so I can gain some perspective on the issues. It’s nothing major. Just a few things need ironing out and writing better, and I need to check for repetition.

Her Fallen Angel is in much better shape now after final tweaks. I wanted to make sure that the conflict came through and things weren’t overly easy for them. It’s ready for the final polish and proof now, and will hit the deadline for release on October 16th.

I’ve started writing a new story this morning. Vampire for Christmas is my seasonal offering for the year. I’m hoping to get it written in first draft this week and then edited and ready for release in November. That’s a short deadline but I only decided to do a seasonal piece just the other week, so I didn’t really get much notice myself. Sometimes I have to roll with the muse. He wants to write a paranormal Christmas story, so I’ll write one. I have the plot down for it, and just need to write the beast. It’ll probably be another novella, topping out around 30,000 words. It’s a vampire piece, obviously, but the heroine is human and a hunter no less. I like toying with vampire / vampire hunter relationships. I won’t give too much away about it though. It’ll spoil the festive surprise! I have a whopping 1500 words of it written as of this morning, but I’ll hopefully be up to around the 6000 word mark by the time I get home from work.