I have a new guest author this week – the wonderful Sheri Fredricks! She’s here to talk about the third book in her series and share a hot excerpt! I’ll hand things over to her now…

Hi Felicity! Thank you for inviting me to be a guest on your blog today.

For those of you who donâ€™t know me, my name is Sheri Fredricks and I love to create modern mythic romance stories. My sensual books hold the hidden secrets of shape-shifting centaur warriors, wood nymphs who disappear into trees, trolls who dive undergroundâ€”and more!

Portals of Oz is a novella spin-off of that series: 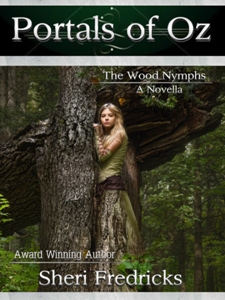 She came to Willow Bay to satisfy her curiosity of human life, and got more than she bargained for.

Jack, an archeologist bent on discoveryâ€¦

He can’t wait to leave Pennsylvania and return to his explorations in Australia, where life is filled with dingos and roos.

Human hunters stalk the enthralling Abelia, and Jack comes to her rescue. The hunters back off, but she suddenly vanishes, and he’s left confused as he returns home to the rugged Outback.

When Abelia magically appears in Jack’s kitchen, she must divulge who and what she really is and risk the mythic people’s secret for his help to return home. Meanwhile, he risks his heart in convincing her to stay.

Abelia rocked her hips forward. She rode his hand with instinct, and a passion so pure that it dragged Jack down into her uninhibited intensity. He grasped hold and tugged the top of her sundress down farther and used a ferocious suction on her nipple that caused her to cry out. His thumb pressed and flicked while his finger slid rhythmically deeper. Jack’s hard won self-control all but disintegrated as he slipped a second finger into her amazingly snug channel.

Her body jolted with a burst as is sheâ€™d become overwhelmed with sensation, and he reveled in her responsiveness. Her hands gripped his wrist, desperately holding him to her, and she again cried out from his teasing fingers.

The wood floor lay unforgiving beneath his knees, yet he hardly felt its bite as he slid lower over Abeliaâ€™s body. When his eyes were even with her glistening sex, Jack removed his hand and in a quick movement, replaced it with his mouth. He sealed his lips to the lips of her sex, and sweet nectar tantalized his tongue. Craving more, he licked and sucked, stroking her receptive body closer to climax.

“Should I make you come, sweetheart?” His voice echoed in the empty room as a thought occurred to him. “Can I make you come? Are you different from humans that way?”

“Please, Jack.” She gasped, her green eyes glittering like emeralds, filled with need as impatient as his own.

He doubted she was conscious of anything but what her sleek body cried out for, but her eyes were focused on him. He knew she saw him, saw the need within him.

“Pleaseâ€¦” she repeated on a moan.

If he didn’t get in her soon, he’d crawl out of his bloody skin. His cock was full, throbbing, ready to explode. Jack leaned up and sat back on his heels, easing the zipper down past the lump.

Abelia’s eyes widened when his engorged cock sprang free of his jeans, then she licked her lips and smiled. A subtle hip rotation coupled with her unconscious pelvic thrust, and he nearly came unglued before they even began.

One-handed, he shoved his pants down, past his thighs.

He leaned forward and kissed her hard, sweeping inside so she could taste herself on his tongue. In careful, controlled bursts, he pushed inside her snug body by excruciatingly slow inches. Her little tight channel swallowed him up, every agonizing increment.

Abelia threw her head back, keening in loud gusty huffs.

Need consumed him in a roiling storm, and his breath grated fiercely as he wrestled to focus. To stay in control. But it was hopeless. Jack was too primed, the deep-rooted throb of his body an unbearable thrill. He pulled back, and slammed home hard. Again.

In an instant, her breath hitched and she gasped with unbound pleasure.

While his lips explored her throat, he felt her moan vibrate against them as her body burst around his cock. Convulsions ripped through her that endeavored to squeeze the essence out of him.

Never before had he felt a splintered impact of pleasure as he did right now with her body milking him in turbulent upheaval. And never had he experienced such a sense of amazing satisfaction when she lay breathless and seemingly boneless beneath him.

Close to the edge of a mind-blowing cliff, he lurched forward once more. He ground himself so deep into her womb that he felt the rising wave of his release from a different plane within him.

Abelia lifted her sweet thighs to wrap them higher over his hips. It sank him further into her, and he shattered.

For a moment, he made no sound. His vocal cords remained frozen in spasm as he crested over. A star burst behind his tightly shuttered eyes and sudden scalding heat pulsed from his body and into hers. The release burst forth in profound, satisfying rushes that forced him to cry out from deep in his throat.

Gripped in endless pleasure, the tense muscles in his braced arms trembled as he was hit by the percussion of rippling post-orgasmic shudders that coursed through her, obliterating his consciousness. 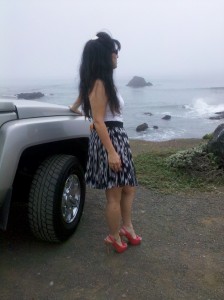 Always on the hunt for the uncommon things in life, award-winning author Sheri Fredricks thrives on creating adventures in her mythological kingdom.

A former engineering secretary, Sheri lives on Californiaâ€™s beautiful central coast. “I wanted to move away from inflexible right angles and create an unboxed world with no boundaries.” A voracious reader since her early years, Sheri found her brain crowded with stories and characters of her own. “Ultimately,” she says, “my husband encouraged me to write them all down.”

Sheri loves to spend time at home. A computer hutch keeps her focused on creating stories, but the panoramic view of life on a ranch will call her outside to play in the sun.

This entry was posted in guest blogger. Bookmark the permalink.