My sexy sons of Hades are finally hitting centre stage!

I’m excited today. Very excited. Back in 2008, I had an idea for a series about the seven demi-god sons of Hades. I’ve always loved Hades as a god in Greek mythology, and have always had a soft-spot for mythology in general. I’ve never seen the relationship he had with his wife as anything other than one born of love and passion. I know, he practically abducts her in the myths, but the romantic in me likes to think that Persephone knew what she was doing when she ate those pomegranate seeds. When I think about Hades and Persephone, I think about them in love, one soul full of light and the other full of darkness. They’re a balance for each other (much like many of my heroes and heroines). I’ve looked at pictures of them before and one I really loved and felt summed up everything I feel about them as a couple was this picture by Sandara on DeviantArt: 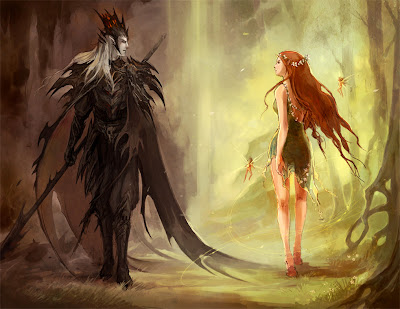 See how she’s all light to his darkness? I adore the looks on their faces too, that sort of moment of eye contact that would give you a hot jolt. This picture always backs up my impression that Hades needed Persephone because she was from a world he couldn’t enter but one he longed to be part of. She’s his link to the light and everything he desires. Plus, I always imagine Hades is sexy as hell. This is definitely the sort of image I have of him and Persephone, and just imagine how delicious their sons would be! I know the series is about their sons, but both Hades and Persephone will feature in it too.

I’ve been working on the series about my strapping, sexy Hades’ boys ever since 2008. We’ve often discussed their stories, their pasts, and their heroines. In fact, we’ve discussed it so much that I have over 75,000 words of notes on the series and the books, and these seven sons. Hell, we’ve even discussed their parents and the boys are very touchy about anyone who says their father kidnapped their mother and forced her into marriage. According to them, Persephone adores her doting yet dark husband.

It’s a series that I have been wanting to write since I first came up with the idea four years ago but I have always delayed it. At first, I delayed it because I wanted to really hone my craft and make sure I was at the peak of my writing ability when I penned the stories. I didn’t want to write them and then look back and wish I hadn’t because I could do it so much better at that future point in my career as a paranormal romance author. I also wanted to give the series time to come to me piece by piece. This series is epic, and the characters are larger than life and the sort who will have you melting or chomping at the bit to get your hands on the next brother’s book. The world is so huge that it needed time to come together and form, and I didn’t want to force it.

I’ve only spoken a little about the series with readers, but whenever I talk about it, it seems to draw your attention. I love that. I really think you guys will enjoy it because it has my usual blend of passion, mindblowing action, extreme twists, heroines who will go out there and get their man/heal their man/bring that bad boy to his knees, and heroes who will really capture your attention and your hearts. They’re the sort of heroes that I know you’re all going to love. A combination of sinful, lethal, dangerous and powerful. Think of past heroes like Julian, Snow (okay, so he’s a future hero), Aleksandr, Valentine, Kearn, Antoine, and any of the others who are tortured, emotionally distant, snarky, arrogant, or downright dangerous and a little bit crazy. That’s the sort of sexy brand of hero you’ll be getting, and to top it all off, they’re brothers! Not brothers by a bond, but brothers by blood. Who wouldn’t want seven sexy brothers?

It’s a very big world too, with gods and goddesses, different realms, magic, demons, and all manner of creatures in between. It will be laden with mythology. If you liked what I did in Love Immortal, then you’ll probably love this series to pieces. If you like the depth of world building I have in my Vampires Realm series, then you’ll really enjoy this one.

Can you tell I’m excited about it and finally getting to write it? I can’t wait to put fingers to keyboard and get working on the first book. They’re all going to be novel length and epic paranormal romances.

It’s a world that I really can’t wait to share with you all. I’ll keep you posted as I’m writing the books and we can explore the world and the characters together. I hope you’re all as excited about it as I am. I know it’s a departure from my usual vampires, but so were my angels and you all seem to love my winged heroes as much as my fanged ones now.

Do you enjoy a blend of mythology in your books? Looking forward to see what sexy demi-god heroes I can come up with? Feel free to leave a comment and put in your opinion.

This entry was posted in Hades' Boys, writing. Bookmark the permalink.