Turned by a Tiger (Eternal Mates Book 12) is out today + awesome giveaway!

TURNED BY A TIGER, book 12 in the series, is out now. It’s time to catch up with what has been happening in this world of shifters, fae, dark elves, demons and angels… 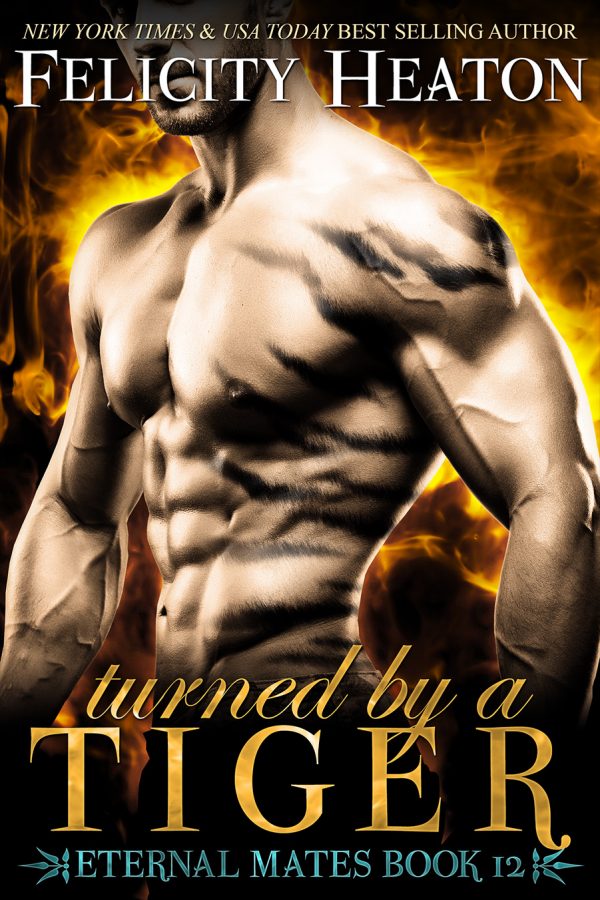 On the verge of bleeding out and hunted by his merciless torturers, Talon has no choice but to seek sanctuary at Underworld, a nightclub run by a jaguar shifter liable to kill him on sight for being a tiger shifter male. What he finds in the old warehouse isn’t the grim shadow of Death though but an angel of mercy, one who offers him salvation and revenge—one who happens to be his fated mate.

Tending bar at Underworld is never dull when you’re a mortal surrounded by immortals, but when a gorgeous tiger shifter covered in blood stumbles into the club, and set’s fire to her boss’s temper, Sherry’s entire world is in danger of being turned on its head. Something about the mysterious warrior has her stepping in to save him, something that ignites her heart and stirs her soul, and no matter how fiercely she fights it, she can’t hold herself back.

When Talon reveals the name of his captors, and his plan to head back in to save his friends, will Sherry be brave enough to embrace the feelings he stirs in her and step deeper into the world of immortals? And will Talon be strong enough to resist the lure of Sherry to protect his family’s secret or will he risk everything to claim his eternal mate?

Enter the grand tour-wide giveaway to win a $25, $50 or $75 Amazon Gift Card at the Turned by a Tiger book page. This giveaway is international and open to everyone, and ends at midnight on July 16th.

Talon’s knees hit the tarmac with a bone-crunching jolt and he sagged forwards, breath sawing from his lips as he fought to remain conscious and drive the pain back as it swarmed him, threatening to drag him into the waiting darkness. He couldn’t pass out here. They would find him.

He wearily lifted his head and growled low in his throat at the effort it took to do such a simple thing now. Not good.

He gazed down at his lap and then his trembling left hand as he pulled it away from his bare stomach. His hand wobbled and blurred, and he blinked hard, fighting to clear his vision and refusing to let the pain ricocheting through him, a bone-deep savage onslaught that wouldn’t abate, overcome him. The streetlight off to his right caught the thick layer of blood on his hand and turned it black and shiny.

“Fuck,” he growled through clenched teeth and tears stung his eyes.

He forced his right hand up and scrubbed it across his face, rubbing them away.

No damn way he was going to cry, no matter how dire things looked.

He wouldn’t give up.

He pressed his damp right hand into the gritty road and pushed himself onto his feet. Lightning flash through him, fire licking along the length of the wound across his stomach, and he gritted his teeth so hard they creaked, but he kept going, kept pushing, kept refusing to just lie down and die.

Death would be a mercy, one that probably wouldn’t find him before the bastards hunting him did.

Talon staggered onto his bare feet, stumbled a few steps and grunted as his right shoulder smashed into the wall that lined the narrow alley.

Awareness prickled down his spine and he looked over his left shoulder, his long beard scraping his skin and his shaggy black hair falling to obscure his eyes. He didn’t have the strength to push it out of his face.

He had to keep moving. He was close.

The world wobbled around him, losing colour at times, as he stumbled forwards, clutching his stomach with his left hand and wincing with each laboured step. That damned lightning and fire zapped and danced through him with each shift of his body that disturbed the worst of his injuries, forcing him to breathe shallowly in an effort to keep it at bay.

It wasn’t going to end here.

His right ankle gave out and the tarmac loomed in his vision again, but this time he managed to catch himself at the last moment.

Would’ve been a triumph if he hadn’t face-planted into a brick wall instead.

He rested against it, giving himself a moment, aware that if he kept pushing this hard he was going to pass out and that would land him back in their hands.

That prickling sensation came again, warning him they were narrowing the search, growing closer with every moment he stood still. He had to keep moving, even if it was only inches at a time. He leaned against the wall, using it for support and clawing his way along it with his right hand, his fingertips aching as he dragged his weight.

His muscles trembled beneath his skin, on the verge of going liquid as his strength drained away.

Another sensation joined the first.

One of dread that hounded him as he pulled himself forwards with dogged determination.

There were more than night shadows behind him.

It was stalking him like the hunters, waiting for that moment when he gave in.

He would never give up.

He kept inching forwards, the pain mounting inside him stealing his breath as it reached a new crescendo and fresh warmth spilled across his left hand, his life draining from him. Couldn’t give up. Wouldn’t.

Talon growled and pushed onwards, near-blind as fire blazed inside him, devouring his strength and setting every nerve in his body alight. Instinct drove and guided him, a deep desire to survive that lived within all feline shifter species, as strong and undeniable as the need to defend their territory.

Something he was deeply aware of as he finally reached the end of the alley and his destination.

He stared across the narrow road to the red-brick warehouse.

He shouldn’t be here, but he was desperate, had nowhere else to go and no hope of surviving if he couldn’t convince the shifter who owned the building to give him sanctuary.

The chance of that happening was slim, about as slender as him surviving the night.

But he had to risk it.

Underworld was his only hope now.

He checked the silent street in both directions, studying the shadows to make sure he wasn’t being watched, and then limped across it to the other side, slumped against the wall and clawed himself forwards, towards the broad door beneath the unlit neon sign.

The scent of shifter hit him hard, flowing from a torn up piece of wood beside the door, the owner’s calling card and a message to other male cat shifters in their prime.

A warning to stay away.

He reached the door and rested, breathing hard and fighting the nerves rising inside him to mingle with the pain. His limited senses stretched around him, ears pricking as he listened for a sign of life—both inside the building and outside it with him. There was no one in the streets around him, but inside were two heartbeats, not far on the other side of the door.

Talon pulled his hand away from his stomach and banged his fist on the door.

It swung open the moment he made contact and he lost balance, falling inside to land in a heap on the floor.

“We’re closed,” a deep gruff male voice called from the darkness. “I thought you’d locked up?”

Talon ignored the male and crawled forwards, dragging himself with both hands now, desperation driving him and urging him onwards, into the gloom. He growled. He was moving too slowly, the distance between him and the door not growing quickly enough. He needed to go faster.

Pain shot through him, his ears ringing with it and heart labouring in response, and he clutched his stomach with his left hand again, grunting as he fought it. When it eased, he pushed up on his right hand and shuffled forwards, holding his stomach with his other hand. The scent of his own blood filled his nostrils and his vision wobbled again.

He pressed harder with his left hand, trying to stem the bleeding. It wasn’t slowing.

Eyes landed on him, intent and focused.

The air shifted and a growl echoed through the enormous room, unholy and vicious.

A warning he felt all the way down to his bones.

The shifter was going to kill him.