Today, Iâ€™m going to talk about the series and whatâ€™s in store for you all. Itâ€™s my final date on my tour, so it makes sense to end it on a â€œwhatâ€™s next?â€ vibe.

The series focuses on the world of Vampirerotique, a theatre that hosts performances for a vampire-only audience and entertains them with erotic acts between vampires and their human thralls. The theatre is run by four vampires, two of them from elite families, Javier and Callum, and two of them from an aristocrat family, Antoine and his older brother Snow. There are also two vampires who have come in to help run the theatre, and those are Andreu, who is Javierâ€™s younger brother, and Payne. There are humans who work at the theatre, all of them owned by a vampire master, bonded to them by blood. Humans outside this small circle are unaware of the existence of vampires. 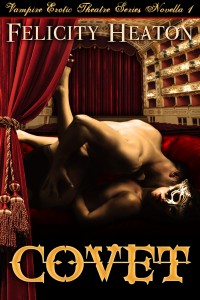 Covet, the first book in the series, introduces readers to the world and to the hero who had the initial idea for the theatre together with his fellow elite, Callum. Javier is a sexy Spanish vampire who has spent the past century running the theatre with the others and lives the life of a bachelor and has little interest in romantic entanglements, until he set eyes on Lilah. Lilah is an owned human, sent to work by her master, and the laws dictate that a vampire cannot touch that which belongs to another without breaking that law, sentencing them to death and paining the human. Javier fights his desire for Lilah for two years, unaware that sheâ€™s fighting her feelings too, until fate brings them together in a private box during one of the erotic performances. Covet is the ultimate forbidden love story and it will have you flipping pages at lightning speed so you can find out how it all ends! 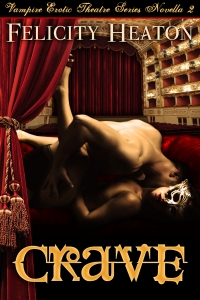 Next in the series is Crave. In Crave, we follow Callum to Paris. Callumâ€™s role at the theatre is sourcing performers and heâ€™s come to the city of love on business, not for pleasure. When he sets eyes on a gorgeous woman in a nightclub, he tries to fight his dark desire for her but resisting her is impossible. His carnal hunger for a woman most vampires would see as an enemy, a hot sassy werewolf named Kristina, will leave you panting for more. 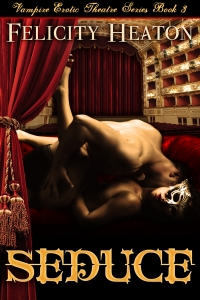 Antoine, the younger aristocrat vampire owner of Vampirerotique (only around a thousand years old), finds himself the target of a calculated and merciless attack on the defences around his heart in Seduce. Sera, a beautiful young elite vampire, has been watching Antoine since she first attended the theatre with her sire and now she is determined to chip away the ice that protects his heart and set him on fire, and sheâ€™ll do whatever it takes to gain an audience with him, even get on the stage herself and act out a private performance for his eyes only. Seduce is out now! 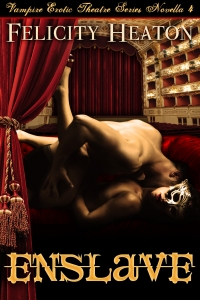 After those four stories have set your hearts on fire, I will be luring you all back to the theatre later this year with the next book in the series! 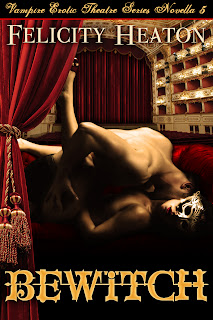 First up is Payneâ€™s story, Bewitch, where the young elite vampire travels into the fae underworld searching for a way to help Varya and Andreu. Chasing leads isnâ€™t his style, especially when most of them are dead ends. His final shot at helping his friend is a witch who seems to be immune to Payneâ€™s enigmatic charms, and she wants something in return. But her price is something that Payne cannot give her because to do so he will have to embrace a side of himself he had long wished didnâ€™t exist and face a past he cannot forget.

Book six in the series belongs to the man all hearts have been waiting for if you go by the reviews for Covet, Crave and Seduce, and even Enslave! 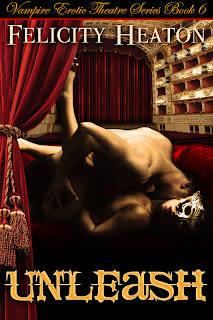 Snow, the older brother of Antoine and a man afflicted with a vicious bloodlust, will be making hearts melt in his story, Unleash. On the verge of losing his sanity, Snowâ€™s battle with his affliction has intensified and become one of life and death. When a woman capable of taming his darkness appears in his bedroom, Snow must face events in his past he had long forgotten and atone for his sins if he is to find the strength to unleash his heart and win her love. But when those he loves come under threat, he must decide whether to fight for his family and lose her forever or fight for love.

I hope youâ€™ll all follow the series and the romances as they unfold at Vampirerotique!

Leave a comment on this post and enter the giveaway on the tour page in order to gain points. Just let me know you commented on this specific post by pasting in the URL into the extra information box.