This is the final review for the books I’ve read recently, and yes, I’ve saved my favourite of the three for last. I adore Lara Adrian’s Midnight Breed series of vampire romance books. She writes a lot like I do, with a similar type of hero and story lines. I guess that’s why I love to read her books so much.

So here’s my candid review of this paranormal vampire romance book by Lara Adrian. 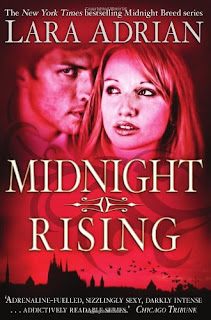 Midnight Rising
Lara Adrian
In a world of shadows and dark, consuming hungers, desire is the deadliest weapon…

For journalist Dylan Alexander, it began with the discovery of a hidden tomb, thrusting her into the center of a gathering storm of violence and secrets. But nothing is as dangerous as the scarred, lethally seductive man who rises from the shadows to draw her into his world of dark desire and endless night.

Fueled by pain and rage over a shattering betrayal, the warrior Rio has pledged his life to the war against the Rogues. He will let nothing stand in his way, least of all a mortal woman with the power to expose the entire vampire race. For an ancient evil has been awakened, and a stunning darkness is on the rise. Suddenly Dylan is powerless to resist Rio’s touch, even as she uncovers a shocking link to her own past. And now she must choose: Leave Rio’s midnight realm, or risk it all for the man who has shown her true passion and the infinite pleasures of the heart.

REVIEW
Ever since I started reading the Midnight Breed series by Lara Adrian, Iâ€™ve been waiting for Rio to find another woman to love, someone kind and compassionate to heal the hurt he still feels from being betrayed by the last woman he loved and chose to share his life with. I couldnâ€™t wait to start this book, which is number four in the series, and I couldnâ€™t put it down once I did start reading it. I was reading this whilst on holiday and kept sneaking in a few pages here and there whenever my husband was out of the room, and before you knew it, I had finished it.

Rio and Dylanâ€™s story is as dark and beautiful as they come. Heâ€™s a man who has lost everything and is on the verge of killing himself to end his hollow and painful existence when Dylan comes crashing into his life, leaving him with one major mess to clean up. Dylan takes photographs of something very personal to the breed, aka vampiresâ€”a stasis chamber for one of the ancients, the forebears of todayâ€™s vampire. Dylan doesnâ€™t know what sheâ€™s gotten herself into but she soon finds out when Rio tracks her down and she finds herself face to face with one hell of a lethal, dangerous, and downright sexy vampire intent on erasing what she saw.

The push and pull between Dylan and Rio is electric, especially after he discovers the crescent-moon-and-teardrop birthmark on her that marks her as a breed female. What they share is so passionate and consuming, but itâ€™s made so much more beautiful by the fact that Rio is so scarred, both physically and deeply emotionally, and as the story progresses itâ€™s clear that Dylan has the power to heal him with her love. Hereâ€™s a hero who needs someone to love him, to break down his barriers and make him accept their feelings and the fact that theyâ€™re choosing to be with him, that they want to be his regardless of how he feels about himself. I loved the way things progressed between these two, and the fight they both put up. Dylan takes no prisoners and she doesnâ€™t back down when Rio gets a mood on and tries to push her away. Sheâ€™s strong, brave enough to handle someone as dangerous as Rio and soothe the beast within him, and she really gives him a reason to live. Itâ€™s not just her love that heals him though, but her ability. It gives him a chance to forgive and forget, and that really helped round off Rioâ€™s story for me.

The threat to the breed is rising too. These guys go from fighting one evil bastard to the next, and the master plan is slowly being revealed. Iâ€™m not normally one for a story arc that covers so many books, but I feel with the MB series that each book is treated individually, and that the central focus is the romance between the hero and heroine, and the story surrounding how they ended up together rather than the overall arc that ties the books into a series.

Iâ€™m also not one for hopping into the heads of protagonists other than the hero and heroine, but I didnâ€™t skip the parts where we ended up in the antagonistâ€™s head as I often do with other books. Lara Adrian doesnâ€™t draw things out in another personâ€™s POV and gets us swiftly back to the hero or heroine once vital information has been given to us. The writing is awesome, and flows smoothly, and I found it easy to picture locations and the world of the breed warriors. I really love the way Ms Adrian words things and tells a story.

If you want tall, dark and sexy, and have a thing for tortured heroes like I do (heck, anyone who has read my books knows that I do!), then youâ€™ll love this book. I really couldnâ€™t put it down. Itâ€™s always a good sign when a book has me sneaking in even just a page when my DH is in the bathroom! I canâ€™t wait to read the next book in the Midnight Breed series, Veil of Midnight. I highly recommend this series to fans of J R Wardâ€™s Black Dagger Brotherhood as it doesnâ€™t taper off like the BDB series did for me. Midnight Breed keeps delivering wonderful book after wonderful book, and Iâ€™ll keep devouring them right to the end.