Posted on 1st May 2011 by Felicity Heaton

Having read the first book in Ms Arthur’s Nikki & Michael series and really enjoying it, I just had to get hold of the remaining three books in the series and read them. I’m glad that I did!

So here’s my candid review of this paranormal romance book by Keri Arthur. 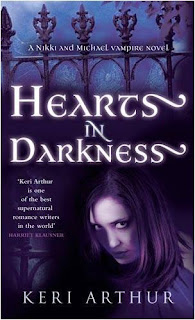 Hearts in Darkness
Keri Arthur
Life has never been so insane for Nikki James. There’s another teenager missing. She has another vampire to contend with. Her partner and best friend Jake is in the hospital dying. And a madman is kidnapping the wealthy. Just when it seems nothing else could possibly go wrong, Michael returns-but not for her. This time, however, Nikki has no intention of running from either the case or from what still lies between her and Michael. And she isn’t going to let him run, either.Â

The last thing Michael Kelly needs is a confrontation with Nikki-especially when his control over his bloodlust is still so tenuous. But when a kidnapper steps up his agenda to murder, he’s forced into a partnership with Nikki to keep her safe. Soon Michael discovers the biggest danger he faces may not be from his need to “taste” her, but from his desire to make her a permanent part of his life-a life that is sure to get her killed.Â

Nikki is determined to make Michael see that life apart is worse than death. But before she can make him see the light, a specter from Michael’s past rises that could destroy any hope she has of a future with him. Because this time the threat isn’t physical. It’s a matter of the heart.Nikki must compete with the woman-the vampire-for whom Michael gave up life.

Review
The second book in the Nikki & Michael series, Hearts in Darkness was another slice of paranormal romantic suspense that had me gripped until the last page. I didn’t want to put this one down, and yet again it was probably thanks to the leading vampire in the book, Michael. Michael is the sort of tall dark and deadly that I love. At the end of the first book, he leaves the heroine Nikki because she gave her blood to him in order to save her life, unwittingly releasing the darker vampire side of him that he had kept on a tight leash. It’s that darkness and the feeling that he could be just as much a bad guy as the next vampire if it wasn’t for his iron will and the depth of his desire to protect the world from his sort of evil, that really draws me to him, along with the romantic notion of wanting to protect Nikki from everything including himself.

This book opens six months after the first and Nikki is heartbroken even though she knew that Michael was going to leave her, and she’s been searching for him whilst continuing her job as a private investigator. Good luck with that since he’s brooding in a remote cabin and quietly pining for her. Her latest case leads her to a run in with a female vampire and her vampire minions from which she barely escapes alive, and together with another case that points towards the same location in Wyoming, it leads her back into Michael’s life. Convinced by his superiors at the Circle to take up a case at a resort called Jackson Hole and to take Nikki with him because she’ll die if he isn’t there to protect her, Michael reluctantly returns to her and convinces her to play newlyweds as a cover during their investigation. Okay, it’s an obvious plot device along with another one in this book that I won’t mention, but it works for bringing them back together and that’s fine with me.

I’m glad that this time Nikki has the good sense to do all in her power to make Michael stay and convince him that his life isn’t the only one full of danger and darkness and that she can handle it if he’d just let her into his world and his heart. We didn’t get the repetition of her feelings this time, although we were treated to a hefty does of repetition of set phrases by the author and a few grammatical errors / wrong word usage. I can overlook those but Ms Arthur really did repeat a couple of things to death, such as licking dry lips and snorting softly, and rubbing her arms. I’ll forgive her for now though as the repetitions this time weren’t as irritating and the plot was great, full of characters and emotion, and suspense too. These books are chocked full of that. The plot is detailed, description is vivid enough to allow you to picture things, and the suspense is enough to hold you in place on your armchair and keep you reading. The romance really blossoms in this one and although it takes half the book for the lovebirds to realise that there’s just no use fighting each other, it didn’t irritate me. I didn’t want them to rush their relationship as I was enjoying just how pigheaded and stubborn the pair could be. They’re a match made in Heaven. Nikki is stubborn as Hell in her desire to conquer Michael’s iron will and determination to keep her at arm’s length, Michael is steadfast in his desire to protect her from his darkness and the evil in his world regardless of the pain he would feel in living without her for eternity. Perfect!

All in all, I’m going to say that if you’re a fan of darker paranormal romances that have plenty of suspense and plot, then pick this series up and fall in love with these characters for yourself. I didn’t um or ah this time about the rating. It’s a straight four hearts from me, and I’m off to read the next book in the series as I want to know what’s going to happen and what changes are going to take place next with Nikki’s evolving powers!

ETA: Elizabeth, one of the antagonists, is supposed to be 800 years old, but at one point Michael thinks about how she loves to pit vampires against each other in fights and puts it down to her being born in the time of roman gladiators. Well, not if she was only 800 she wasn’t! Pretty basic historical inaccuracy.

Read reviews of Hearts in Darkness by Keri Arthur on Goodreads: http://www.goodreads.com/book/show/4969823-hearts-in-darkness