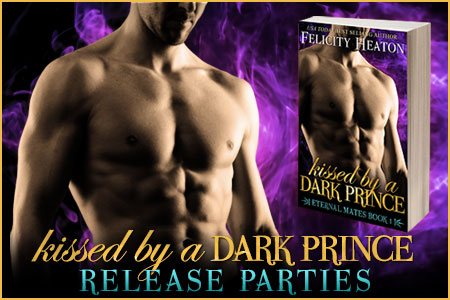 To celebrate the release of Kissed by a Dark Prince, the first book in the Eternal Mates romance series, I will be hosting two amazing release parties. One party will happen on Twitter on December 10th, and the other will happen on Facebook on December 14th. Full details on the parties and how to join in the fun is below…

Join me on Tuesday 10th December, from 6pm-8pm EST / 11pm-1am UK, on Twitter for an amazing and insane two hours of fun where there will be gift cards, ebooks, and paperbacks to win, plus your chance to ask me questions about my books, characters and more. If you’re in Australia, this party will happen on Wednesday 11th December between 10am-12pm Sydney time.

To join the party, just show up on Twitter at the announced time and include both my Twitter username @felicityheaton AND the hashtag #KissedbyaDarkPrince in your tweets. It’s as simple as that!

If you can’t join me for the Twitter party, or just prefer to do your socialising on Facebook, then come along to the Facebook Release Party. This party will happen on Saturday 14th December, from 10am-8pm EST / 3pm-1am UK. In Australia, that will be Sunday 15th December from 2am-12pm. The event at Facebook will go on all day long and I’m hoping to have some fantastic guests throughout the day and I have some great giveaways lined up, where prizes include ebooks, paperbacks, gift cards and mini Lego Snow figurines!

Here’s more about the book:

Kissed by a Dark Prince
Felicity Heaton
Olivia thinks itâ€™s her lucky night when a dangerously handsome unconscious fae ends up on her inspection table. Heâ€™s her chance to redeem herself with her employer, the demon-hunting organisation, Archangel. But when the tall, dark and deadly immortal warrior awakes, she gets much more than she bargained forâ€¦

Attacked by his enemy in the elf kingdom, the last thing Prince Loren expects when he comes around is a beautiful angel watching over him and medical technology of the mortal realm. Hazy from his injuries, all he can focus on is the pulse ticking in her throat and the sweet allure of her blood.

One single bite reveals she is his eternal mate, triggering a bond between them that will leave him weakened until it is completedâ€¦ or broken, and pulling Olivia into the crossfire of his ancient feud.

To protect his people and his mate from the machinations of a madman, Loren must risk everything by working with Olivia at Archangel to find a way to break the bond blossoming between them.

But will Loren be strong enough to place duty before desire and give up the one thing he has waited millennia for and craves above all othersâ€”his eternal mate? And will Olivia be able to resist the incredible heat that burns between them and the temptation of her dark princeâ€™s kiss?