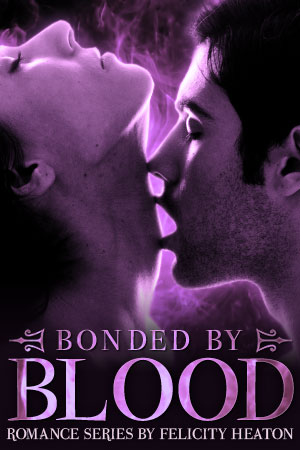 I’ve taken to talking about my works in progress on Wednesdays at the moment rather than on Fridays. It has a better ring to it! Today, I’m going to talk about one of my current works in progress and then share a sneaky snippet from the first book in the series.

I announced a few weeks back that I had a new vampire romance series in the works. Bonded by Blood is being written for my agent, Jenn, and hopefully we’ll be approaching NYC publishing houses with the first book and the series in 2013. The first book in the series is entitled Blood Lust and is about a vampire warrior called Kaden, and the younger sister of his best friend and leader of this cadre of warriors, Eliana. Of course, falling hard for your best friend’s sister? Not a great idea, and Kaden knows it.

There are seven very hot vampire warriors in the book and I’ve been having fun getting to know them as I write their character profiles, and explore their world too. I’ve been thinking about the history of Eliana, Quinn (her brother) and Kaden. I don’t normally have characters who have such a long history with each other, and it’s been great delving into these three and uncovering how they met, the key times they spent together, and events that shaped their lives, and of course the events that will shape their future lives too.

I think the series is coming together nicely and I will soon be at a point where I can write the initial few chapters and then the story outline, as well as a series arc, for my proposal. Hopefully, the book and series will go down well with my agent and publishers, and will get picked up by someone and then I can write the book in full. I won’t write the book in full until I get a contract for it because I just don’t have the time right now, not if I want to get the other books I’m committed to written and released in 2013!

If you have any questions about the Bonded by Blood series, do feel free to leave a comment with them or email me.

Here’s a sneaky snippet of the opening scene of the book, Blood Lust.

â€œBrother?â€ Elianaâ€™s soft voice curled around Kaden on the icy breeze, warming him down to his very bones.

Kaden forced himself to keep his eyes on Quinn. If he dared to look at her, Quinn wouldnâ€™t hesitate to lay down some ground rules for the entire house by making an example of him. Everyone knew that Quinnâ€™s sister was off the menu, but normally it wasnâ€™t a problem. Normally, she was back home at the Fairchild mansion, socialising at balls and working for her fatherâ€™s company. Normally, she wasnâ€™t throwing off fuck-me pheromones.

Quinn swam out of focus as Kadenâ€™s senses worked to pinpoint the lovely Eliana. An electric current pulsed through Kadenâ€™s body, awareness of her chasing over his skin, sensitising it and making it hard to breathe. He had never figured out why she did that to him, set every hair on end and had him panting in a heartbeat, lost and wild for her.

Kaden remained rooted to the spot, flakes of snow melting on his face and in his hair, chilling his skin. She was watching him, gaze intent and studying, taking him in from his black boots to the soft spikes of his blond hair.

â€œEliana.â€ Quinnâ€™s voice held a note of warning for her too and Kaden sensed her move away.

He risked it and glanced to his right. Her hood was down but the cream coat still swamped her slender frame. Auburn waves curled around her narrow shoulders and his heart froze in his chest when she looked back at him, her pale green eyes lingering on his for a second before she disappeared from view.

He scrubbed a hand down his face.

The scent of her drifted around him, sweet and intense, calling to his darker urges and filling his mind with images of her that he would never forget. The last time they had seen each other.

She had been beautiful then, young and vibrant, full of life. He had marvelled each time he had watched her from a distance at the social gatherings, torturing himself with the sight of her with other males, men more worthy of her notice. Quinn had always been there, and he had smiled back then, grinning and laughing, and forever with his arm slung protectively around her shoulders. She had been coming of age and the entirety of Londonâ€™s vampire society had been there to help her celebrate. Too many eligible males for Kadenâ€™s liking. He had hung near the back, leaning against the pale yellow wall of the ballroom, his eyes on her. She hadnâ€™t looked at him once.

She had drunk a little too much in the end and Quinn had singled him out as her designated driver. He had taken her home in his Mercedes and helped her out of the car, and that was when it had happened.

She had kissed him.

He had done both. He had kissed her hard before he had come to his senses and realised what he was doing, and then he had set her away from him. She had stared up at him with a lost look in her striking green eyes, her dark eyebrows furrowed in confusion.

Kaden had marched her to the door of the mansion, opened it for her, and then marched himself to his car and forced himself to leave.

He hadnâ€™t seen her since.

A stronger male would confess that he had been avoiding her. He hadnâ€™t. Not much anyway. So, he hadnâ€™t gone to the Fairchild mansion and had turned down every invitation Quinn had sent, using the excuse that he was busy. After a few weeks, he had let things start to even out again, and had even attended a few of the strictly male social gatherings, reaffirming his friendship with Quinn. He never asked about Eliana though. What was there to ask about? It had been nothing more than a drunken kiss. She probably would have kissed any male, and she probably hadnâ€™t remembered it the night after.

Did you enjoy the sneak peek? I’ll have more for you as I write the first book.

This entry was posted in Blood Lust, Bonded by Blood, paranormal romance, vampire romance. Bookmark the permalink.
Sort by:   newest | oldest | most voted

Wow loved it, looking forward to when this series comes out.Kaden sounds like my kinda man yummmm

Â I’m really looking forward to continuing working on this series and getting this first book written and the proposal over to my agent. I’ll be sure to post more as I write the book.