It’s been another mixed week for me here in castle Heaton. I started the week with a schedule for each day, and I’ve stuck to it for the most part, but there has been a little shift here and there between my set times for thing. I haven’t been spending as much time editing Her Guardian Angel as I should have been as I have so many guest blog spots coming up in my blog tour and I wanted to get ahead of the game and get lots of them done now.

I have another 6 or so to write and then I’m clear until the end of June. I’m hoping to get some of them written this weekend and then sent out. The crazy thing is I have around 18 blog dates for promoting Forbidden Blood and now I have to think of 18 unique things to do for them! 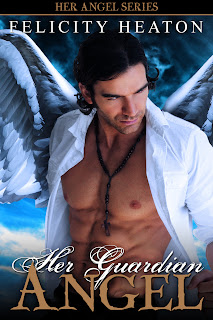 Monday and Tuesday was spent catching up on admin stuff and also addressing comments that I had made during my initial read through of Her Guardian Angel. I started out with 106 comments, mostly notes on improving areas, adding new stuff, repetition, and other things. I worked my way down to 13 major comments (generally layering more stuff into scenes or adding new stuff) and prepped for starting the full edit. I was meant to start that on Wednesday, but wound up writing blog posts and doing other stuff related to writing. I did start my edit again today, and have reached page 27 of 220. It doesn’t sound like much, but at this stage it’s good progress. I’m pleased with the story so far and it’s in good nick, so doesn’t need heavy editing, just polishing and tweaking, and paying attention to the details.

I also signed up to participate in Six Sentence Sunday, so watch out for my first one this Sunday, and sorted out my blog tour schedule, including adding new dates.

I think it’s been quite a productive week, and my muse is enjoying my new structured approach to my days, although I think he’d like a bit of a break for a few days. I think I’ve worked every day for the past couple of weeks, so I need some downtime and some rest. I did manage to get another book read this week. It was a Kindle freebie, Her Vampire Husband by Michele Hauf. Much better than the previous freebie I had read by her, Kiss Me Deadly, which I only gave 2 stars to and that was a push. This one gained 3 stars from me, and I would have given it 4 but I was a bit irritated by the heroine and the authors blatant attempts to make her sound young. I like a more mature kick-ass kind of heroine in my stories. This week has also seen me thinking about my release schedule for next year, and also writing notes for the next book in the Shadow and Light Trilogy. The first book, Ascension, has been getting great reviews, so there’s all this pressure to make the next novel just as good, if not better, than it. I don’t mind a challenge, and I think the story I have in mind will appease readers and reviewers. There’ll be plenty of action and passion in this one too, and a very kick-ass Taig and Lealandra, and yeah, they might just go to Hell to find out what happened to Taig’s parents.

Other books I’ve been writing up notes for are When Darkness Falls which is a Vampires Realm story I’ll be writing for next year, and also my Hades’ Boys series. I’m really hoping to start writing that series this year and to get the first couple of books in it released next year. It’s going to be a kick-ass series and I think everyone will really like the heroes in it, and the heroines too because they’ll do their share of kicking butt, or at least assisting to kick butt.

I think next year is going to be as full of paranormal romance books as this year is for me. I wish I could find the time to write another science fiction romance, but I have to focus on what my muse is into, and at the moment it’s vampires, demons, and gods, with the odd angel tossed in for good measure.

I also think next year is going to be a year for series books. At the moment, I’m planning to release the Shadow and Light Trilogy #2.5 and Shadow and Light Trilogy #3. Book 2.5 in the series is a novella focusing on another two characters in the series. Alongside those two books, I’ll release another Vampire Venators story, as well as one or two Vampires Realm stories. I’m debating whether to write another novel or novella in the Her Angel series. I do have a character in mind for one, but I’m not sure whether it’s novel or novella material. He’s in the Her Guardian Angel novel, so you’ll get to meet him then. I’ll judge whether to continue the series when that one is released.

Last up for next year is my Hades’ Boys. I need to design a website for it, gather all my materials, and also prepare other stuff for it. It’s going to be a very big series of seven novels. I have the first three roughly planned, and their place in the overall arc that runs through the series. I think the characters are basically there now, with only a little more work needed on them. I’ve been working on this series in the background since 2007 or maybe 2008. It’s been years anyway. It’s probably about time that I wrote it, and I feel I’m in a place now where I can justify writing it and I feel I’ll make a top job of it. I’ve been reluctant before now because I wanted to write it when I was at the top of my game, and had learned enough about writing to produce something amazing with this series. All seven books will be linked, although there’ll be individual baddies for each hero to fight, but those baddies will all be part of the same team, and I’ll reveal little by little who the big bad is behind everything. Just talking about it makes me want to write it!

Back to work for me.

Don’t forget that tomorrow is the third chapter of Forbidden Blood on Sneak Peek Saturday. There’s only 21 days left before this book is released in e-book, and shortly afterwards in paperback.

Also, don’t forget to enter my 500 BLOG FOLLOWERS INTERNATIONAL GIVEAWAY if you haven’t already. Following the instructions on the giveaway page. Invite your friends too. We’re up to 375 followers now, so there’s only another 25 to go before we reach the next level of prizes!